NAND flash devices, available in 128Mb to 2Tb densities, are used to store data and code. Low-density NAND flash is ideal for applications like STBs, digital televisions (DTVs), and DSCs while high-density NAND flash is most commonly used in data-heavy applications like SSDs, tablets, and USB drives. There is a continuous effort to reduce the cost/GB of NAND devices, so device life cycles tend to be shorter with more frequent process lithography shrinks. NAND requires a controller, either internal or external, and specific firmware for error code correction (ECC), bad block management, and wear leveling. 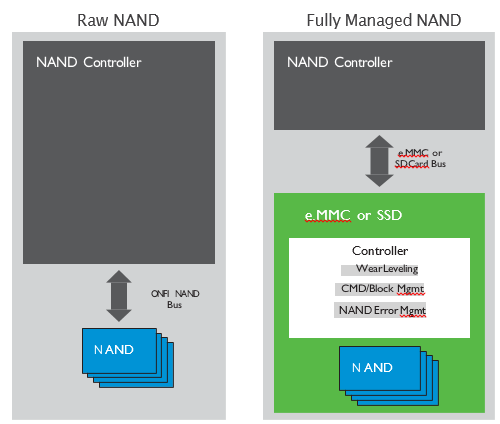 Raw NAND provides the lowest cost per bit but requires an external host controller (not contained within the package) to perform all manage¬ment functions (e.g., ECC, FTL).

Managed NAND provides simpler solutions and speeds time-to-market because the controller is embedded within the package to handle wear leveling, bad block management and ECC.

A basic knowledge of the various kinds NAND Flash-based memory solutions available can help designers make informed decisions about which NAND Flash device to specify for a particular design. This article's general description of each of the NAND Flash options helps illustrate what makes them better suited for some applications than others. More technical information about each memory type can be found in the Products section of our Web site.