How the Cloud Formed — And Where It’s Heading

When you sit down for your work day, you probably don’t think about how much of what you’re doing happens in the cloud. Are you sending emails? Are you scheduling meetings in your online calendar? Are you sharing files with coworkers and sending images to them in web-based presentation slides? Even at home, you’re likely using the cloud more than you realize. Are you taking photos that are backed up and accessible on your laptop? Are you storing your music with a cloud service and then downloading to your smartphone just what you want during your workout or walk? Are you taking suggestions from your device on the next several words to include in your email?

All this information is stored in the cloud, which, contrary to most web graphics and branding, is not actually a puffy cotton ball in the sky. Rather, the cloud is a physical space filled to the brim with servers and memory components.

But just how did we get to this point? Didn’t we simply store all our documents, photos and music on our computers just a few years ago. To share documents, weren’t we just saving them on floppy disks and flash drives and transporting them between laptops and desktops? Where did all that at-home and on-device memory go?

It hasn’t gone anywhere. With the power of your device’s memory and the cloud’s capacity combined, artificial intelligence (AI) is growing by leaps and bounds in nearly every smart device! You can now find a photo of your best friend among your albums more quickly because of facial recognition. You can be introduced to music you may like by sophisticated algorithms. As we yearn for better facial recognition and faster on-device decision making, the cloud will work in tandem with our edge devices to make our wildest AI dreams possible. Say goodbye to handwritten meeting reminders and task list suggestions — and say hello to possibly the smartest AI assistants yet.

Why Do We Use the Cloud in the First Place?

While the cloud is omnipresent in nearly everything we do online, whether we’re backing up our phone apps or saving photos to online albums, it wasn’t always that way. In fact, cloud storage and cloud computing didn’t really become accepted until just about 10 years ago, according to Micron’s senior customer program manager, Gregg Wolff.

“I think a big factor in the trend of moving from on-premise memory to the cloud is just around the 2008 timeframe,” Wolff said. “With the financial meltdowns and challenges at that time, many companies recognized that their servers were pretty underutilized from an on-premise perspective.” In essence, because of the state of the economy and the hardships that businesses were facing, it made sense to move from storage hardware to cloud storage. This move was, in great part, focused on consolidating and maximizing resources. Wolff added, “The trend of the cloud is really a story about efficient use of compute resources, via virtualization, and the ability to put multiple users and jobs really on the same boxes.” When surveying their options, companies in a financial pinch could easily see that the costs associated with the hardware they needed for their various functions, as well as the IT services to keep it all running, far outweighed the cost of using the cloud — and that was in the cloud’s infancy!

“We're to a point now where there's really no workload that can't be duplicated in the cloud, and we certainly see better economies of scale moving into a hyperscale environment.”
Gregg Wolff
Senior Custom Program Manager, Micron Technology

And this still rings true today. Even now, the pros of using the cloud for many workloads beat out the cons of investing in on-premise resources nearly every time. That’s not to say that on-premise enterprise servers will go away. In cases where the data must be ultra-secure, or network bottlenecks cause serious impacts to workloads, on-premise enterprise servers are still king. Wolff explains that today the average enterprise’s server might sit at about 20- to 30-percent utilization, whereas a typical hyperscaler in the cloud could get up to 80-percent utilization. This is, according to Wolff, “a staggering difference.” Instead of relying on their own maybe superfluous servers with more-than-enough memory, these enterprises could share hardware in the cloud, save money and maximize their resources. “We're to a point now where there's really no workload that can't be duplicated in the cloud, and we certainly see better economies of scale moving into a hyperscale environment,” Wolff said. Moving to cloud storage is a no-brainer for most companies. In 2010, according to Statistica, the cloud storage industry revenue totaled $640 million. Just six years later, that industry surged to $4.04 billion.

In January 2018, RightScale conducted its state of the cloud survey for the seventh year in a row, reporting that 96 percent of respondents use the cloud, which is up from 92 percent in 2017. Even further, the organizations surveyed reported that they are using applications in an average of 3.1 clouds and experimenting in 1.7 other clouds, which leaves them at nearly 5 cloud programs each.

With so many people and companies banking on the cloud and its computing and storage functions, what’s next? The answer is artificial intelligence. Artificial Intelligence in the Cloud

The cloud serves a host of functions, and companies are consistently trying to expand those boundaries and do more. Among the growing array of uses is artificial intelligence, which can sift through increasing amounts of data to find trends and patterns that help us make decisions. Artificial intelligence is becoming more streamlined and sophisticated than ever before. “I mean, what aren't they doing in the cloud?” Wolff asked.

In the next three years, according to Nasdaq IR Insights, capital expenditures (CapEx) on cloud infrastructure is projected to nearly triple. In 2017, it sat at a hefty $41 billion, but by 2021, that should rise to more than $108 billion. Within that infrastructure, AI servers now make up a very small portion of the cloud. But, by 2021, they’re projected to make up about 10 percent, and by 2025, they’ll surge to nearly half of cloud infrastructure. AI servers require double the amount of SSDs and six times the amount of DRAM as standard servers. These are two powerful and efficient products in which Micron specializes. 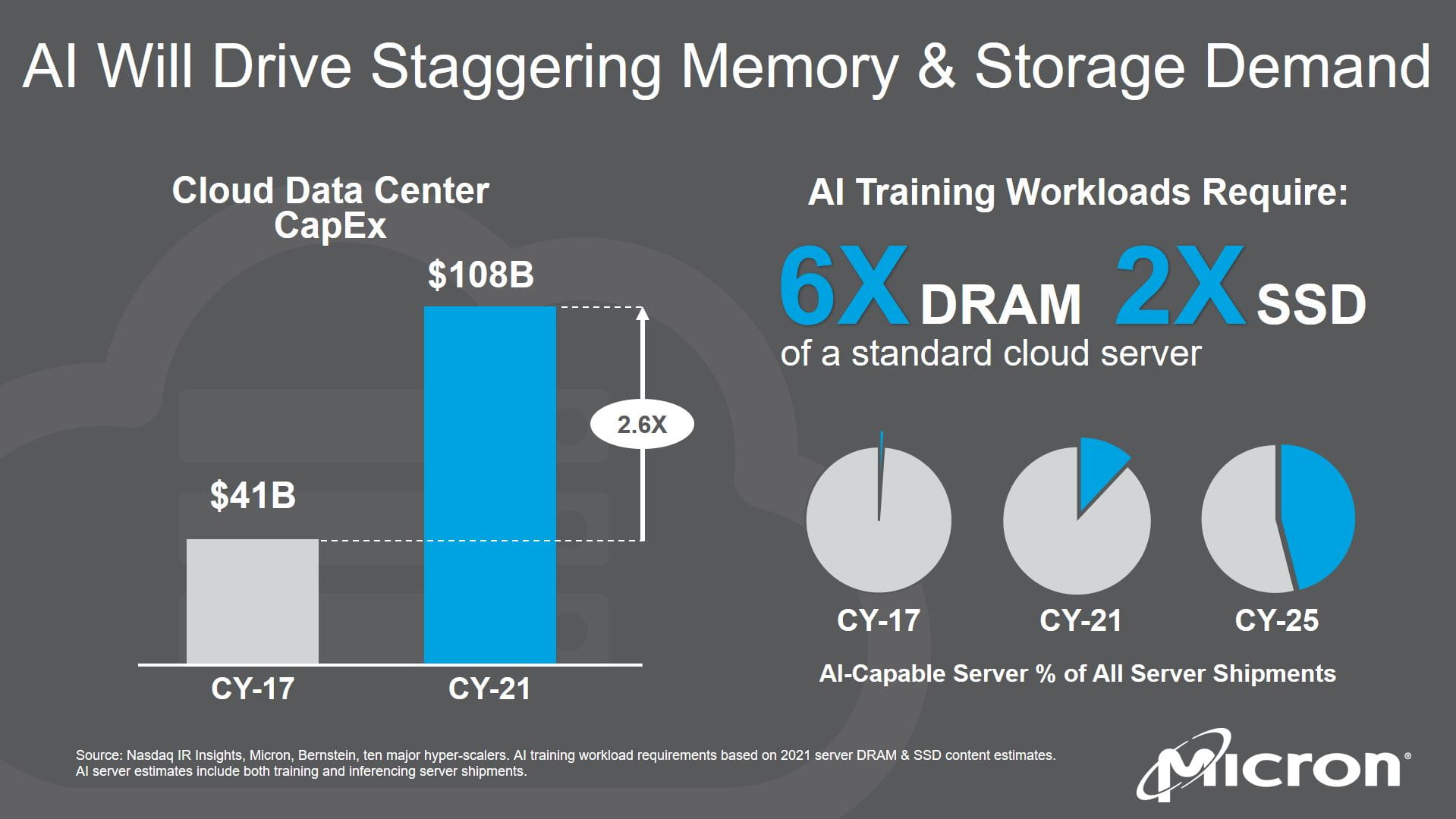 At this point, it’s not surprising that artificial intelligence capabilities in the cloud are limited. Due to network deficiencies, generally sporadic downtime and the small percentage of AI servers, even the strongest data centers can’t fully support all computational needs.

Because of this bottleneck, edge devices must also be equipped with powerful memory to perform the processes that absolutely must be done on the hardware itself. Both the cloud and edge have roles to fulfill in AI — and their success starts with better memory.

Smart devices rely heavily on the cloud for mountains of data, which AI algorithms can sift through. And as they sift through that data looking for useful trends and patterns, they create more of their own data to add to those cloud-based mountains, increasing the amount of memory needed in the data centers. Once the data centers have more memory, edge devices will need to be more powerful to sift through and squeeze the full value from the mountains of data. It’s a never-ending cycle, and it all comes back to powerful memory.

Evolving for Stronger AI in the Cloud

With increased memory needed across the board, DRAM is only so strong. As we move forward with better and stronger artificial intelligence, memory must be upgraded and evolved until it functions seamlessly for our new processes.

Micron is at the forefront of innovation in this field. As we move memory closer to a device’s processing unit or move those processing capabilities directly into the memory, computing functions will perform faster than ever. In addition, Micron is also researching emerging memory technology to dramatically increase the density of memory while maintaining near-DRAM performance.

With these research opportunities and more, Ryan Baxter, Micron’s director of data center marketing, believes Micron is in the perfect position to support the cloud and all its computing endeavors. “There's nothing with a faster growth rate or a larger opportunity than the cloud. And vice versa, the cloud doesn't exist without using what we make,” Baxter said. “It's symbiotic; we grow with the cloud just like the cloud grows with us.”

“There's nothing with a faster growth rate or a larger opportunity than the cloud. And vice versa, the cloud doesn't exist without using what we make. It's symbiotic; we grow with the cloud just like the cloud grows with us.”
Ryan Baxter
Director of Data Center Marketing, Micron Technology

Baxter views his and Micron’s role in the upcoming evolution of the cloud as a translator. As clients become more invested in the cloud and consumers place more emphasis and need on the cloud, Micron will be there to identify those desires, act on them, and provide the strongest memory to fuel them. It's our job to sift through this industry and trend information and understand how to connect the capability that we offer a company to what the customers are asking for in a cost-efficient way,” Baxter said. “And we’re doing that by investing in these stronger, more efficient memory innovations.”

So, go right on ahead. Send that email, upload that photo, stream that movie. The cloud is there for you and will grow stronger and stronger as your edge devices support it. As Micron upgrades and evolves memory and as we everyday users become more reliant on the cloud, the artificial intelligence that can enhance our lives will be just a few swipes, taps or downloads away.