Virtual reality (VR) is a harbinger of many things, but not of exercise and fitness, right? The same goes for video games. Sitting on the couch in the basement with a game console or VR headset playing Halo Recruit, Tomb Raider or Fortnite can’t possibly be anything other than a fun, yet sedentary activity, can it?

In 2014, the Centers for Disease Control and Prevention identified hours playing video games as a risk factor for low physical activity in the United States. The lazy “couch potato” is ranked right up there with the stuffed baked potato as a public health hazard.

We recently wrote about new applications and equipment designed to move your workout into a VR environment. But what about the VR games you’re already playing? Are they good for your health or are they helping propagate the obesity epidemic?

Is Gaming Just for “Couch Potatoes”?

Aaron Stanton, founder of the VR Institute of Health and Exercise, disagrees that video games are simply a passive activity.

“Several years ago,” Stanton recalled, “I was playing a VR game called Audioshield, which requires a lot of physical motion to play. I remember Steam telling me that I had spent somewhere between 100 and 120 hours playing this game. I thought to myself that it feels like I'm exercising, and if it is exercise, then my VR setup has become the best exercise equipment I've ever invested in. I've never, ever spent a hundred hours, cumulatively on a treadmill, or an elliptical, or a rowing machine, all of which I happen to own.”

Stanton was the founder and CEO of BookLamp, a technology-based book analysis platform that was sold to Apple in 2014. As a serial entrepreneur, he had the drive to build something new. Stanton followed his instincts in the aftermath of his exercise epiphany.

“I started researching what it takes to measure calorie and energy consumption in unknown exercises,” Stanton said, “and read about metabolic measurement systems, which measure the mixture of oxygen to CO2 on the inhale and then again on the exhale, so you can calculate indirectly exactly how many calories the body consumed during that process.”

To prove his theory of VR and video gaming as legitimate fitness endeavors, Stanton needed sophisticated lab equipment, which runs about $75,000 to $100,000 per machine and is usually owned by a research university. He reached out to the kinesiology department at San Francisco State University (SFSU) and pitched the idea that VR is going to be substantial in the future of exercise.

Stanton created the Virtual Reality Institute of Health and Exercise to benchmark and rate VR games according to the amount of physical exercise they produce. According to Stanton, “If you have a game out there that's rated as a “resting equivalent” game, it implies that somewhere in the universe is a game that is rated something else.” And that something else is what the institute seeks to find.

As Easy — and Effective — As Riding a Bike

Most people fundamentally misunderstand the value of VR in exercise. To better understand their value, SFSU conducted a study with 20 male and 20 female research subjects, mostly kinesiology students, people who had studied physical exercise their entire lives and were generally healthy. The researchers conducted traditional VO2 max tests, which test physical fitness, including physical capacity to exhaustion. A few days later, the 40 subjects played VR games for 30 minutes, wearing all the testing equipment.

At some point during that 30 minutes, nearly all the subjects reached their maximum capacity. They were using enough energy that their lungs were incapable of converting oxygen fast enough. And when you reach that point, you're only a few minutes from collapsing because the human body can only function like that for a little while.

“My VR setup has become the best exercise equipment I've ever invested in.”
Aaron Stanton
Founder, VR Institute of Health and Exercise

Most significantly, the subjects were hitting calorie-expenditure rates comparable to biking the Tour de France, a competitive, staged race through the Alps and Pyrenees. When asked to rate their exercise throughout the entire session, virtually all the participants felt they had only been doing a moderate to intermediate level of exercise. Their bodies were doing as much work as they physically could do, and yet their perception was that they had been doing a light to mild jog on a treadmill.

Here’s the thing that Stanton is betting on as he helps grow the body of VR fitness research and refines his video game ranking system: “What VR is really good at doing is distracting you, and this is incredibly important in exercise. When you're distracted, you have a goal or you have something you're focusing on, you do not perceive discomfort the same way.”

Stanton added, “What we find is that people tend to exercise longer because they're enjoying it; they're not experiencing the pain as much.”

As most of us know, rewards after the fact are far less effective at motivating us to do anything, much less keep exercising, than the intrinsic rewards of the activity itself. And if VR can nurture that intrinsic motivation for exercise, people are more likely to do it. The motivation helps them push past the discomfort and boredom. 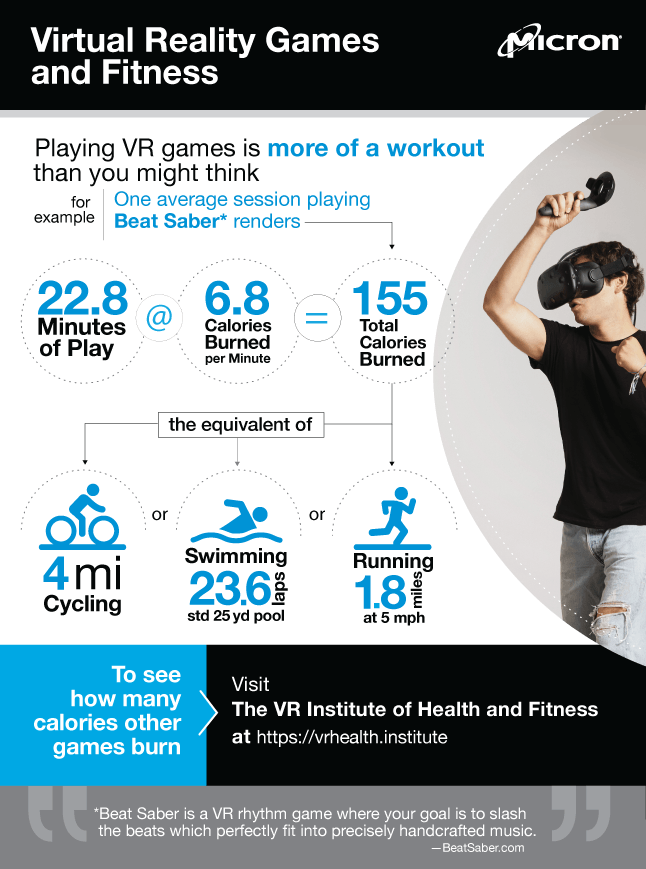 Muscles Are Built on Memory

There would be no Fortnite without the fortitude of memory technology powering each VR session. What will ultimately drive this idea of gaming as fitness is the strength of the computing hardware to create an exceptional VR experience.

As we have mentioned in other blogs and articles, developing high-bandwidth gaming capability is not easy, especially when VR is involved. It takes an understanding of the systems, which means integrating the best graphic processing units (GPUs) and graphics memory that can properly handle VR.

The data throughput makes an experience more immersive. Graphic rendering, especially in a 3D VR environment, requires substantial amounts of data processing in real time. To move that data to the GPU and throughout the system requires high-bandwidth graphics memory. Systems have built-in mechanisms that, if they do not get all the data fast enough to populate the pixels on the screen (or in this case in your VR goggles), simply drop that entire frame and move on to the next.

When games are running at 60 frames per second (fps) or higher, one dropped frame is imperceptible to the human eye. However, if it starts dropping more, your eye may not catch it but your subconscious brain certainly will, throwing off your equilibrium and inducing nausea or dizziness.

The hardware, especially memory, plays a huge role in creating an immersive, smooth and enjoyable VR experience, without dropped frames or nausea. When a VR system is running smooth and fast, you can really get lost in the game. When that game requires physical activity, your body reaps the benefits. You don’t have to feel guilty for spending time playing VR games. Get off the couch and play — your body will thank you.

In case you missed it, read part I of the VR fitness series: Turn Your Workout Into a Game: VR and the Future of Fitness

Learn how technologies are revolutionizing medicine in this inspiring panel of experts from the Knight Cancer Institute at Oregon Health Sciences University, GenapSys and the Moffitt Cancer Center, moderated by Micron’s Dr. Bambi DeLaRosa.
Read more ›

Dear Universe, Tell Me Your Secrets

Leading scientific experts discuss how technology can unlock the secrets of the universe.
Read more ›
+