Semiconductor memory chips are manufactured in cleanroom environments because the circuitry is so small even tiny bits of dust can damage it. Micron has class 1 and class 10 cleanrooms.

In a class 1 cleanroom, there is no more than 1 particle of dust in a cubic foot of air. In comparison, a clean, modern hospital has about 10,000 dust particles per cubic foot.

The air inside a cleanroom is filtered and recirculated continuously, and employees wear special clothing such as dust-free gowns, caps, and masks to help keep the air particle-free. 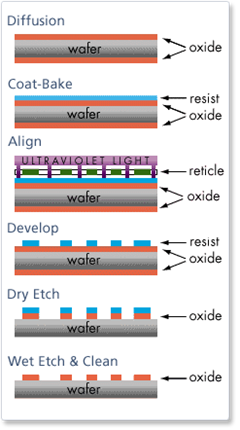 Diffusion - A layer of material such as oxide or polysilicon is grown from or deposited onto the wafer. The first material deposited helps create the first layer of the semiconductor "skyscraper."

Align - A reticle with the circuit pattern for a given level is aligned over the wafer. Ultraviolet light shines through the clear portions of the reticle exposing the pattern onto the photosensitive resist.

Develop - The photo resist is chemically treated in a develop process that selectively removes the exposed regions of resist and leaves the unexposed regions containing the pattern information on the reticle.

Dry Etch - The wafers are placed in a vacuum chamber, and a mixture of gases are pumped in and excited by electricity. This plasma eats away the material not protected by the remaining resist. When the unprotected material has been removed, the remaining material begins the pattern of the circuitry.

Wet Etch and Clean - The remaining resist is removed in wet etch to reveal the patterned oxide layer. Then the wafer is cleaned. The process is repeated up to 18 times to create the various layers necessary for each part's circuitry.

In this sterile environment, the wafers are exposed to a multiple-step photolithography process that is repeated once for each mask required by the circuit. Each mask defines different parts of a transistor, capacitor, resistor, or connector composing the complete integrated circuit and defines the circuitry pattern for each layer on which the device is fabricated.

At the beginning of the production process, the bare silicon wafer is covered with a thin glass layer followed by a nitride layer. The glass layer is formed by exposing the silicon wafer to oxygen at temperatures of 900 degrees C or higher for an hour or more, depending on how thick a layer is required. Glass (silicon dioxide) is formed in the silicon material by exposing it to oxygen. At high temperatures, this chemical reaction (called oxidation) occurs at a much faster rate.