Electrical characteristics of selected areas are changed by implanting energized ions (dopants) into areas not protected by resist or other layers. The dopants come to rest below the wafer's surface, creating the positive and negative areas on the wafer which encourage or discourage the flow of electrical current throughout the die. These basic steps are repeated for additional layers of polysilicon, glass, and aluminum.

The finished wafer is an intricate sandwich of n-type and p-type silicon and insulating layers of glass and silicon nitride.

An insulating layer of glass (called BPSG) is deposited and a contact mask is used to define the contact points or windows of each of the circuit elements. After the contact windows are etched, the entire wafer is covered with a thin layer of aluminum in a sputtering chamber. The metal mask is used to define the aluminum layer leaving a fine network of thin metal connections or wires. 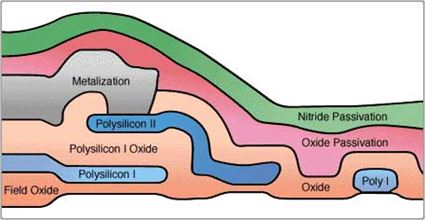 The entire wafer is then covered with an insulating layer of glass and silicon nitride to protect it from contamination during assembly. This protective coating is called the passivation layer. The final mask and passivation etch removes the passivation material from the terminals, called bonding pads. The bonding pads are used to electrically connect the die to the metal pins of the plastic or ceramic package.

While still on the wafer, every integrated circuit is tested and functional and nonfunctional chips are identified and mapped into a computer data file.