This is a great day for users of mainstream client platforms with a storage solution designed to enhance the experience of business client, consumer and gaming applications. We announced today that the Micron 2550 NVMeTM SSD changes the equation with outstanding benchmark scores and PCIe Gen4 performance that surpasses the competition.1 Designed for a great user experience, it makes everyday applications faster and more responsive and, with its low power consumption, the Micron 2550 SSD dramatically extends compute time for battery-powered PCs.2

This exciting product is the result of years of listening to our customers and developing techniques that integrate decades of Micron innovation with the newest technology.

With the Micron 2550, we focused on the key elements required to deliver a superior user experience including outstanding performance, power efficiency and reliability. Greater performance means you can more swiftly load your applications, create content, save documents, edit videos and use your PC to its greatest potential.

You can do all this with better power efficiency, as well. Imagine you are a remote worker who wants to spend some time at the park with your children and get work done at the same time. The Micron 2550 SSD provides battery-friendly active idle power consumption of less than half a watt so you can extend your time and continue to get work done – all with greater performance than in prior generations of storage.

The Micron 2550 also includes features designed to facilitate rapid responses from your storage such as predictive cache optimization, which actively manages data reads and writes. This enhanced performance is totally automatic—integrated intelligence for optimal performance.

Our customers also demand performance that improves the responsiveness of real-world applications and activities such as web browsing, 3D gaming, video editing and file copying. The PCMark® 10 storage benchmark simulates traces from these real-world applications and every-day activities to assess the performance of storage. Each test simulates tasks such as starting popular games, copying files, using office productivity applications and even booting Windows 11. The full suite of tests is shown in the table below.

The benchmark produces an overall score as a measure of storage performance ― where a higher score is indicative of higher drive performance.

In our lab testing, the Micron 2550 consistently provides performance that surpasses the competition in PCMark 10 Storage benchmark scores.3 The relative PCMark Storage 10 scores of the 512GB and 1TB versions of the Micron 2550 compared to its competitors are shown below in Figures 1 and 2. 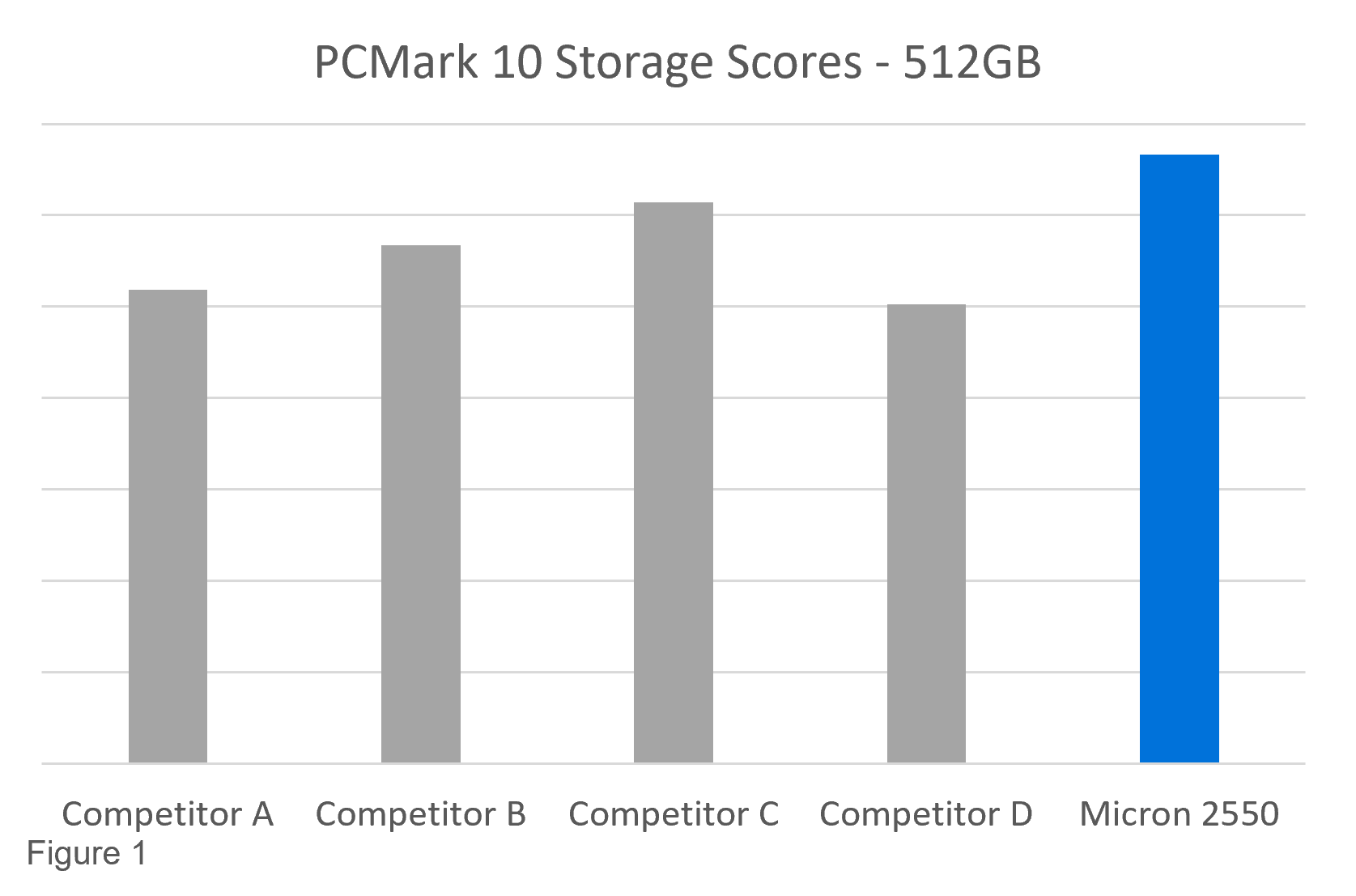 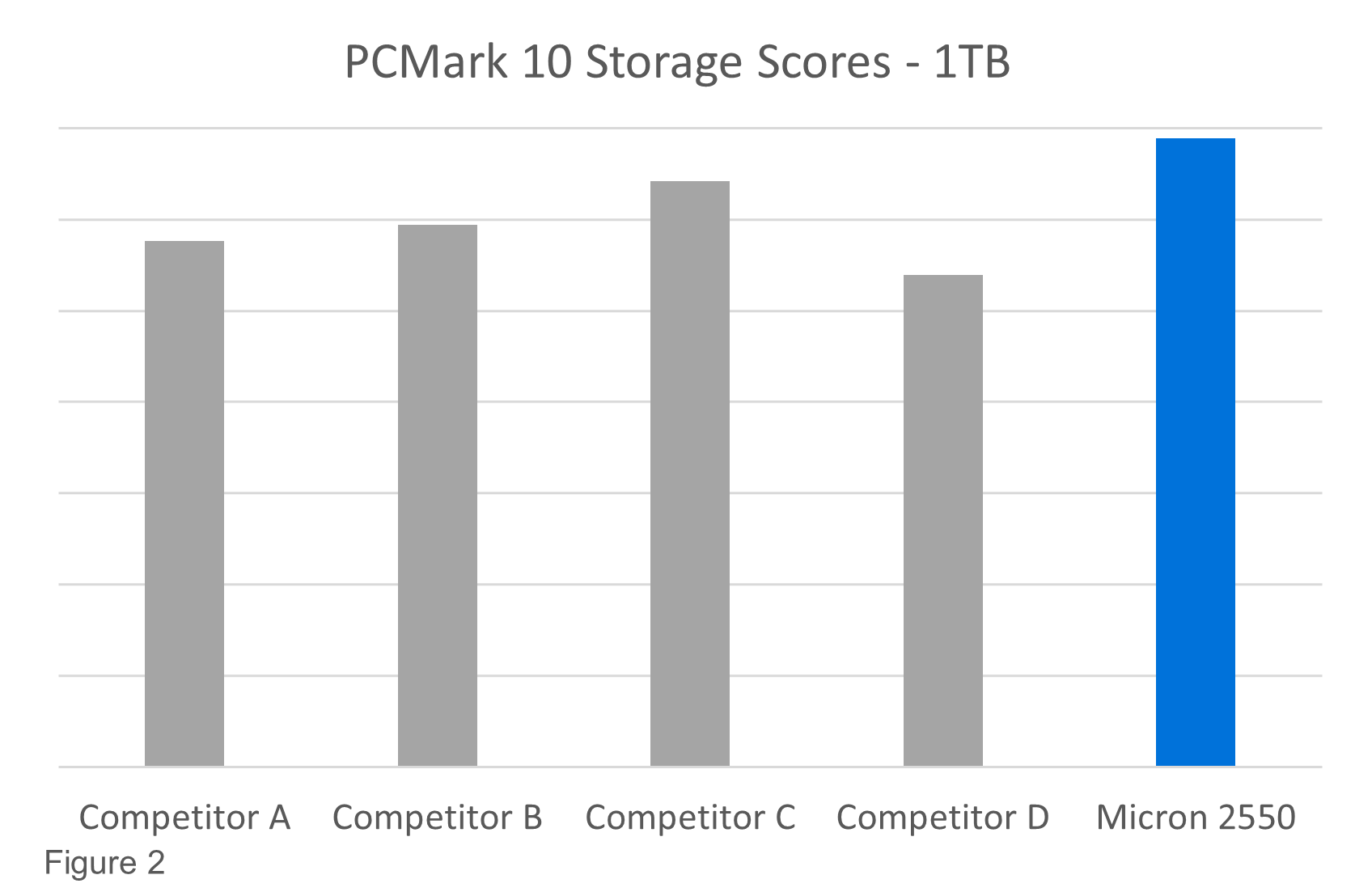 The Micron 2550 SSD provides power-efficient storage that enables you to get more battery life from your work and home devices. Consuming under 2.5 milliwatts during sleep, under 150 milliwatts of active idle power and less than 5.5 watts during active/read write – the Micron 2550 is power efficient and designed for low power consumption for daily computing needs.

The Micron 2550 includes a standard 3-year warranty and is highly reliable, with impressive endurance, which allows you to store huge amounts of data daily, for years, without worry. For example, the 1TB version of the Micron 2550 has a 600 terabytes written (TBW) endurance rating. This means you can write over 164GB to your SSD every day for 10 years – a lot of data and endurance for your daily needs!5 It’s also designed with a mean-time-to-failure (MTTF) rating of two million hours.

Providing a superior user experience with the right combination of performance, power efficiency, reliability and endurance for users such as students, business teams, casual gamers and content creators, the Micron 2550 is the perfect SSD choice for your all-day computing needs.