When Micron India launched the University Research Alliance of Micron (URAM) last year, we aimed to build a network of collaboration that would fuel dialogue and knowledge sharing, spark connections among some of the best engineering minds in the country and motivate them to join us. Twelve of India’s premier universities joined URAM at launch, choosing to engage with Micron through the various avenues that the integrated program offered.

Over the last 12 months, we’ve built foundational partnerships and introduced thousands of students and researchers to Micron and the role Micron’s memory and storage solutions play in enriching life for all.

Micron’s commitment to the program was demonstrated by Sanjay Mehrotra, Micron’s president and CEO, who delivered the inaugural lecture last fall. In the months that followed, more than 1,000 students and faculty attended speeches from one of Micron’s and the world’s most prolific inventors, Gurtej Sandhu, and from Raj Talluri, senior vice president and general manager of Micron’s mobile business unit. Sumit Sadana, our chief business officer, and Manish Bhatia, executive vice president, global operations, will be presenting soon.

With keener recognition of who we are and the emerging role of memory and storage in the data economy, Micron has quickly moved from a day four slot on a campuses’ recruitment schedule to a day zero slot. 200 of the India’s best engineering minds were recruited in the last campus season and came aboard in July.

With the 2021 campus season almost upon us, we have added eight new universities to the URAM roster and expanded the scope of the program to include scholarships, curated knowledge sessions, open innovation challenges and more advanced research collaborations. We will head back to campus with renewed vigor and plans to hire over 300 candidates this season.

With more than 2,400 employees, Micron’s India operations have reached critical mass, and our teams have made meaningful contributions to ongoing design and product roadmaps. The next phase of our journey toward becoming a transformation and innovation hub for Micron will be made possible by the quality of talent we can attract, engage and retain.

Given our plans to expand our employee footprint to 5,000 over the next three to four years, URAM is a vital platform for us to engage and collaborate with universities, government agencies and industry. 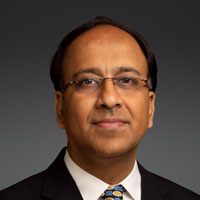 Anand Ramamoorthy spent the first nine years of his career in Silicon Valley as a hands-on chip designer before moving into management and global business roles. Returning to India in 2009, Ramamoorthy has stewarded products, engineering operations and technology innovation in the region. He leads Micron’s Global Delivery Centers in Bengaluru and Hyderabad.