When we scale a database — either locally or in the cloud — performance1 is imperative. Without high performance, a massive-scale database is little more than an active archive.

When an entire data set is small and fits into memory (DRAM), performance is straightforward and storage system capability is less important. However, with immense data growth, a dwindling percentage of data fits into memory affordably.

This technical brief highlights the performance advantages measured when we compared three four-node Cassandra clusters: one built using legacy HDDs and two built using enterprise SSDs (one per node and two per node).

Note: Due to the broad range of Cassandra deployments, we tested multiple workloads. You may find some results more relevant than others for your deployment.

When we built Cassandra nodes with legacy HDD storage, we scaled out by adding more nodes to the cluster. We scaled up by upgrading to larger drives. Sometimes we did both.

Adding more legacy nodes was effective (to a point), but it quickly became unwieldy. We gained capacity and a bit more performance, but as we added to the clusters, they became larger and more complex, consuming more rack space and support resources.

With both techniques, performance was expensive and did not scale well with growth.

High-capacity, lightning-quick SSDs, such as the Micron® 5200 series are changing the design rules. With single SSD capacities measured in terabytes (TB), throughput in hundreds of megabytes per second (MB/s) and IOPS in tens of thousands;2 high-capacity, ultra-fast SSDs enable new design opportunities and performance thresholds. 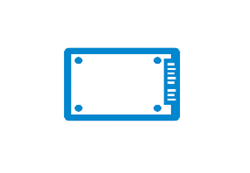 Figure 1a: SSD Configuration 1 - a single SSD per node 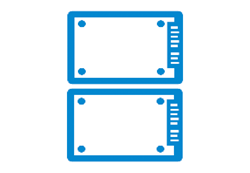 Figure 1b: SSD Configuration 2 - a pair of SSDs per node 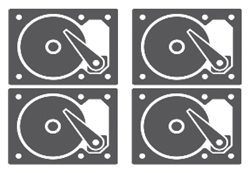 We used the Yahoo! Cloud Serving Benchmark (YCSB) workloads A–D and F3 to compare three four-node Cassandra test cluster configurations: Note: Due to the broad range of Cassandra deployments, we tested multiple thread counts. See the How We Tested section for details.

Read Response Consistency: Since many Cassandra deployments rely heavily on fast, consistent responses, we compared the 99th percentile read response times4 for each test cluster and workload. Figure 3 shows the 99th percentile read latency for each configuration.
Workload A
An update-heavy workload, with 50% of the total I/Os writing data. At the application level, this workload is similar to recording recent session actions.

Workload B
A read-mostly workload (95% read). At the application level, this workload is similar to adding metadata (such as tagging photographs or articles) to existing content.

Workload C
A read-only workload. At the application level, this workload is similar to reading user profiles or other static data where profiles are constructed elsewhere.

Workload D
Reading the latest entries (most recent records are the most popular). At the application level, this workload is similar to reading user status updates.

Workload F
A read/modify/write workload in which records are read, changed and written back. At the application level, this workload is similar to users reading and changing data or tracking user activity.

Some Cassandra deployments are more heavily dependent on fast and consistent inserts. We also compared the 99th percentile insert response times for workload in inserts (A, B and F). Figure 4 compares the three configurations. 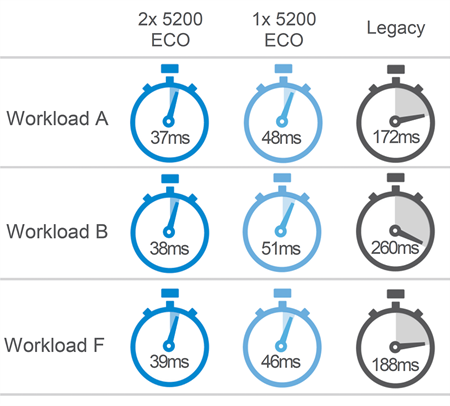 High-capacity, high-performance SSDs can produce amazing results with Cassandra. Whether you are scaling your local or cloud-based Cassandra deployment for higher performance or faster, more consistent read responses, SSDs are a great option.

We tested two clusters for database performance and read responsiveness across multiple workloads. We built a legacy cluster using four 300GB 15K RPM HDDs (RAID 0) in each node and two SSD clusters, one with a single 3.8TB Micron 5200 ECO and a second with a pair of them in each node. The results were amazing.

The single SSD per node test cluster showed a significant increase in performance over all the workloads, ranging from a low of about 1.7X up to a high of 7.5X compared to the legacy configuration. The two SSD per node test cluster was still more impressive with workload increases ranging from 2.2X to 10.7X compared to the legacy configuration. We also found that the SSD-based clusters’ read responses were much faster with far greater consistency.

We expect great performance when our data set fits into memory, but immense data growth means that smaller and smaller portions of that data fit into memory affordably.

We are at a crossroads. Business demands drive us toward higher performance, and data growth drives us toward affordable capacity. When we combine these, the answer is clear: Enterprise SSDs deliver Cassandra strong results, helping tame performance demands and data growth.

Given data like the above, our customers are increasingly finding that deploying SSDs in the data center is a high-value option for better overall total cost of ownership (TCO). If you are curious how this compares to other configurations, try Micron’s Move2SSD TCO Tool to estimate the savings you can see from deploying SSDs versus existing architecture.

Table 1 shows the tested configurations, the types of storage devices used, and the number and capacity of each as well as the number of nodes in each Cassandra test cluster. Table 2 shows the hardware and software configuration parameters used.

Our test methodology approximates real-world deployments and uses for a Cassandra database. Although the test configuration is relatively small (four nodes in each cluster), Cassandra’s scaling technology means these results are also relevant to larger deployments.

The database is initially created by utilizing YCSB workload A’s load parameter, which generated a data set of approximately 1.5TB, far exceeding available DRAM (ensuring we measure storage system IO). The database is then backed up to a separate location on the server for quick reload of data between test runs. For each configuration under test, the database was restored from this backup, starting every test from a consistent state.

Table 3 shows the percentage of data owned by each of the four nodes.

Table 4 shows the testing parameters used in the tested workloads.