LPDDR5 Brings Flagship Features to a Wider Range of Phones

The smartphone is the most important consumer device today. It has transitioned from being a phone to ... well, being just about everything else. A recent study showed that making calls was the least common use for a smartphone — it came in 11th out of 11 options.

What it is increasingly used for is computational photography, real-time mobile gaming and 4K live video streaming — all of which, at their core, require powerful, efficient memory to ensure a seamless user experience. Top phone manufacturers around the world are looking for next-generation memory to power these growing data-intensive use cases.

They found it with Micron’s low-power (LP) DDR5 DRAM, which provides premium performance for flagship and midrange smartphones. Since the start of this year alone, Micron’s LPDDR5 has had massive momentum, debuting in a wide range of phones from Asus, Motorola, Xiaomi and more. This builds upon Micron’s 2020 milestone of its memory debuting in Xiaomi Mi 10, the world’s first smartphone to use LPDDR5.

Micron LPDDR5 is uniquely flexible, delivering not only fast performance and power efficiency for premium devices but also seamless experiences for midrange phones. An excellent user experience depends on feeding massive amounts of image, video, gaming and 5G data to increasingly complex processors while leaving enough space in memory for the operating system to buffer applications for multitasking and smooth switching between applications.

Every last bit of this data passes through memory, making it a crucial part of your smartphone. Previously, top-tier user experiences were reserved for top-tier phones, and midrange phones traditionally used previous-generation LPDDR4X. But the flexibility of Micron LPDDR5 has removed these barriers, bringing advanced smartphone experiences to a wider range of phones.

Micron’s industry-leading LPDDR5 delivers bandwidth of up to 6,400 Mb/s — a 50% increase in performance — and 20% better power efficiency than LPDDR4X. And LPDDR5 offers the speed and capacity (up to 16GB) needed to feed artificial intelligence (AI) engines built directly into mobile processors. To avoid 5G bottlenecks, LPDDR5 allows 5G smartphones to process data at peak bandwidths of 51.2 GB/s in a four-channel system.

When smartphone manufacturers list hardware specs, memory type/capacity is often in the top three listed. While users understand that more and faster are better, it’s also key to understand the crucial role memory plays in computational photography, real-time mobile gaming and live 4K video streaming. These use cases depend on feeding data to processors quickly and efficiently while buffering apps for a lag-free transition when switching between them. Let’s look at how memory works in these common applications.

Computational photography requires significant memory to make your shot perfect. Even before you click, the camera is already taking dozens of images that are stored in a memory buffer. And as you click, allocated memory feeds images into AI engines built into a system on chip (SoC), a process that merges images from the memory buffer to create the perfect shot. Memory also stores images while image processers enhance them using image stabilization, light correction, focus and other techniques. 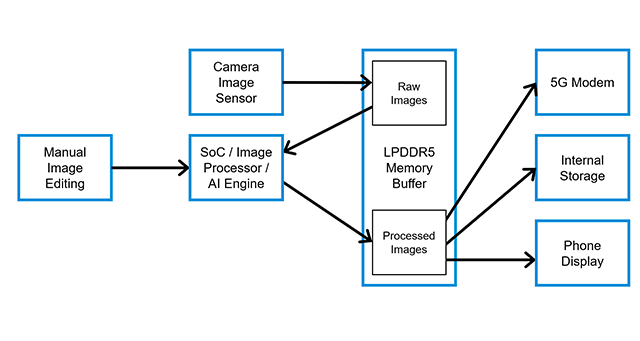 Phones like the Xiaomi Mi MIX FOLD are equipped with multiple cameras that include wide-angle and telephoto lenses. LPPDR5 provides the high bandwidth and capacity necessary to feed images from multiple distinct image sensors to AI engines fast enough to provide real-time image processing. Enabling these cameras with more memory bandwidth is essential to taking the perfect shot. Every time the shutter is clicked, the data pipeline starts: Sensors move raw images into memory, and then image signal processors (ISPs) process the raw image from memory with the help of the AI engines’ image and scene recognition capabilities, followed by image compression and encoding. Bottom line: The data fueling these engines is accelerated by LPDDR5 memory.

According to Xiaomi, their phones arm users with sophisticated photography and AI capabilities to optimize and uplevel amateur shots into high-quality, professional images, and these rich computational photography features are only made possible by LPDDR5 memory, which makes heavy-duty processing possible within milliseconds of a single click.

Streaming from a phone is similar to computational photography where sensors, encoders and AI engines all require a high-bandwidth pipeline. At every stage, every last bit of video data flows through memory. 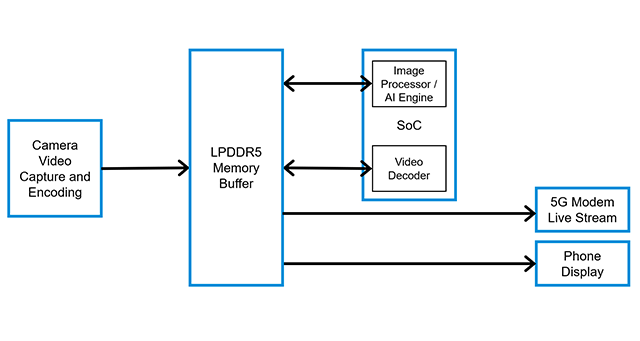 When you launch a graphics-intensive game, data for immediate use is loaded into memory from either storage or downloaded from the network. Next, the SoC processes game data for enhanced visual and audio experiences. Player input is processed by the SoC and stored into the memory buffer. In real-time gaming, information is sent and received through cellular networks and the memory buffer is continually updated. Increasingly intensive games with higher resolution graphics will require the speed of 5G networks – and more memory bandwidth and low latency – to achieve an enhanced user experience. 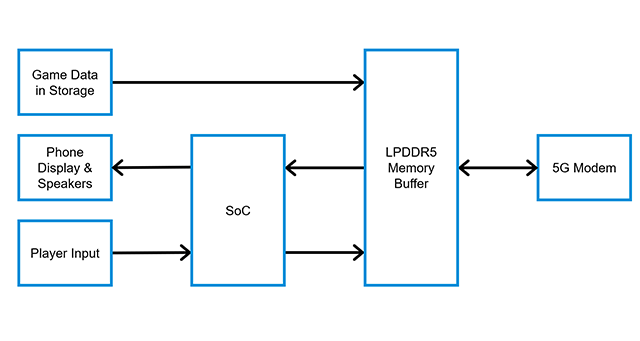 Complex mobile games require high memory capacities for loading active game levels. And before anything even makes it to the phone’s display, game data is running through multiple GPU pipeline stages — vertex shading, rasterization, fragment shading and more — all of which are accelerated by LPDDR5 memory.

Performance-hungry, gamer-focused phones like the ASUS ROG Phone 5 can use as much bandwidth as you can give them to feed game data to processors and deliver incredibly fine screen resolution and high frame rates. These devices boast displays with a 144Hz refresh rate and 300Hz touch sample rate. These capabilities demand ample bandwidth for processing game data in memory for an optimal visual and audio experience. And multiplayer gaming over 5G networks requires ultralow latency for real-time action. Overall, these advanced workloads require higher memory performance and lower energy consumption. LPDDR5 offers both, avoiding 5G bottlenecks by processing data at peak speeds of up to 6.4 Gb/s.

Balancing performance and cost, LPDDR5 also helps bring premium photography, gaming and video experiences to affordable phones like the Motorola’s moto g100. The g100 is equipped with forward- and rear-facing cameras that are ideal for capturing the perfect shots for social media feeds and recording 4K video at up to 60 frames per second or 6K at up to 30 frames per second. The display has a 90Hz refresh rate for smooth mobile-gaming graphics. LPDDR5 performance in a cost-effective package accelerates these features once reserved for flagship phones.

Micron’s industry-leading LPDDR5 extends the rich portfolio of mobile products that balance performance and power efficiency to match workload and system requirements for a wide variety of smartphones.

So next time you turn on your phone, say “thanks for the memory.”

Carla Christensen applies her passion for mobile as senior product marketing manager in Micron’s Mobile Business Unit. With more than 15 years of memory and storage experience, she works to understand system-level challenges and determine future product requirement trends for emerging use cases. Carla holds a B.S. in electrical engineering from Montana State University and an MBA from Pennsylvania State University.
Continue reading