What Do High Performance Systems and Ultra-Bandwidth Solutions Have in Common?

With a global pandemic eliminating sports for much of the spring, I witnessed an interesting development in entertainment when the video game EA Sports’ Madden simulated an all-time NFL team tournament (presented by Bleacher Report). Each team was loaded with its best players of all time, and these “best of all-time” teams played each other until one team was declared the winner. (The Green Bay Packers won!)

Not only did this pique my interest as a football fan, but the concept of watching a simulation with no user participation was intriguing from a technology perspective as well. As video games have progressed through the years, the visual graphics, physics and realism have increased to the point where a pure simulation actually garners excellent viewership on Twitch. With continued improvements in graphics, artificial intelligence (AI) and deep learning (DL), I expect we will see some more simulation-related entertainment soon.

In the fall of 2018, ray tracing was finally introduced to deliver a level of realism in gaming never experienced before. Ray tracing is a rendering technique that can produce incredibly realistic lighting effects. Essentially, an algorithm traces the path of light and then simulates the way the light interacts with the virtual objects it ultimately hits in the computer-generated world.

Ray tracing was discussed for years, but with the introduction of the NVIDIA Turing graphics cards, the technology was finally here, albeit at an expensive cost point. When next-generation gaming consoles are released by Sony and Microsoft this fall, ray tracing will go mainstream. By the end of 2021, ray tracing will be an affordable standard along with 4K/HDR displays. The demand for continued improvements in visual graphics for gaming is not going away — and to meet these high demands, we need memory products that can address these super high-bandwidth applications.

A new class of memory is emerging

Memory is the heart of technology, the driving force that pumps life into every product, application and innovation it touches. Memory system bandwidth is the most critical need for some of the most integral applications of the future. Artificial intelligence, machine learning (ML), deep learning, autonomous driving, high-performance computing (HPC), virtual reality (VR), augmented reality (AR) and next-generation gaming are more than buzz words. Use of these applications is advancing significantly, and each requires an immense amount of data — data that is not just in high capacities but that also must be analyzed rapidly and repeatedly. This process requires a tremendous amount of system bandwidth.

Micron believes 2020 will be a defining year for next-generation developments in memory designed specifically for high-bandwidth applications. With the introduction of GDDR6X, a new class of memory has emerged. Ultra-Bandwidth Solutions is a new category of memory targeted for applications with the highest bandwidth needs.

The world is enamored with turning data into insight with AI. Accelerating intelligence demands the fastest AI training and inference possible. Applications like high performance computing, professional visualization, automotive and networking all require the fastest systems with the greatest amount of hardware bandwidth.

There has always been a space between GDDR and mainstream memory in performance, and that gap continues to grow. The chart below details the separation in I/O and system level performance, highlighting the impressive data points of GDDR6X. 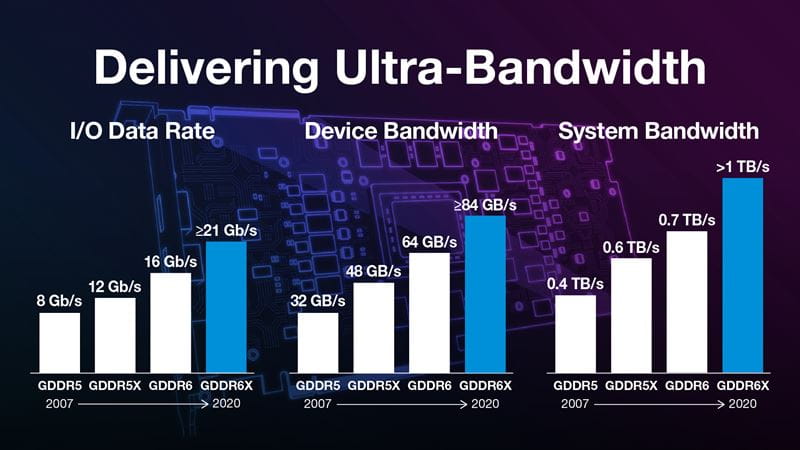 GDDR6X is the latest and greatest iteration of memory from Ultra-Bandwidth Solutions. For an overview, refer to this GDDR6X video. For more information, see the related blog on GDDR6X.

The growth of graphics memory has been exciting to watch over the years. From its humble origins as a niche product used almost exclusively for gaming, graphics memory is now used in a variety of growing segments. Micron consistently delivers key innovative solutions that drive graphics memory expansion past traditional uses into surging applications like AI. GDDR5X was the avant-garde which proved there was market interest in inventive new memory. GDDR6X is the culmination of cutting-edge innovation with the revolutionary PAM4 technology. No longer does the term “graphics memory” adequately characterize our products. Going forward, we have renamed this portfolio of memory: “Ultra-Bandwidth Solutions.”

For customers looking to build the highest performance systems in the world, there is only one supplier with a full portfolio of Ultra-Bandwidth Solutions — MICRON.

Spencer Homan drives Marketing actions as a Manager in Micron’s global Graphics Memory Business. Spencer’s marketing and execution of Micron’s broad portfolio includes high-speed memory solutions that serve the game console and high-end graphics market, where his key roles include engaging with customers and market enablers on Micron’s strategy around products, portfolio and market positioning which have led to leadership positioning graphics products. Prior to Micron, Spencer was with HP where he contributed to their printer division product execution. Spencer holds a Bachelors in Electrical Engineering from The University of Idaho.