Navigating the World of STEM, One Step at a Time

Among the challenges and curve balls we are facing as a community from COVID-19, Micron, like many companies, has had to make difficult decisions, one of which was whether to hold our internship programs this season. With some grit, determination and a bit of creativity, we were thrilled to honor our commitment to our summer 2020 interns and lay the building blocks for future STEM careers. The result has been a wonderful collaborative effort we are particularly proud of.

Our virtual internship program enabled our interns and team member mentors to be more connected than ever before. Interns in Alaska collaborated with executives in Singapore, East Coast met West Coast in a balancing of time zones, and more than 200 interns Zoomed their way through their internship projects. Our distance made us more social. A remarkable 98% of interns surveyed agreed that our program this year was a hit, making it one of the most successful internship programs in recent memory.

To honor our interns and showcase their hard work, we are sharing blog posts by several of these talented interns as they reflect on their unique experiences and begin their STEM journeys. Today, on National Intern Day, Adia Wood shares her story.

My journey into the world of STEM has been fostered by two things: imagination and friendship. Yes, I am aware of how cheesy that sounds, and no, I will not revise that statement.

Ever since I was little, I’ve had a special place in my heart for science fiction. As a kid, I dressed up as Jango Fett for Halloween, and I watched “Star Trek: The Next Generation” reruns religiously. I spent hours reading Arthur C. Clarke and Ursula K. Le Guin, and years trying to write stories of my own. Science fiction was a genre that not only fostered my imagination, but it was something that often felt within reach. Many of the ideas that I encountered, though usually embellished, could one day be brought to fruition or had already been so. My love for sci-fi inspired me to look at the world with its potential in mind, and I felt that the best way for me to explore that potential was through a career in STEM.

Though STEM may not run in my family, it certainly runs within my friend group. As someone with a roommate lineup consisting of two aspiring doctors and a future Ph.D. candidate in microbiology, I can attest that having friends in STEM makes pursuing a career in the field a lot easier. One of my fondest memories from freshman year is sitting in Newell Hall with two of my friends, studying for a physics exam we had the next day. It was probably around two in the morning when the delirium finally hit — from there, we could not stop alternating between freaking out and laughing hysterically. In the end, we all did well on the exam, but I think that the catharsis of our antics actually helped me more than our studying did. Pursuing a career in STEM is no small feat, and having others to lean on is so important. Without the love and laughter of my friends, things would be a lot different.

As I've said, STEM doesn’t happen to run in my family, but amazing mothers do. When I told my mom that I wanted to be an astrophysicist, she simply nodded her head as though there was no doubt in her mind that I would become one. When I changed my career choice to medical examiner, she asked if I’d be able to handle working with dead bodies, to which I replied, “Of course!” (a lie) — and just like that, her support was mine. And when I finally settled on a major for college, she started calling me her “electrical engineer.” Her support never fails to amaze me, and I would not be pursuing a career in STEM if it weren’t for her encouragement.

Full disclosure: There were times when I questioned whether I was following the right path. Difficult classes, confusing labs, challenging exams, the list goes on. Being only one of five girls in a lecture hall didn’t help either. But the more I learn within my major, the more I love it. Last fall, I expressed some nervousness to my professor about the final exam I had just finished. He took the papers from my hands, gave me a reassuring smile, and said, “Trust yourself to do well.” Though it was a simple statement, it’s still rolling around in my head.

Last summer, I interned with Micron on-site in Boise. I had a great time getting to know the city, but I had an even better time getting to know my team. I felt welcomed and supported by them, and they made my summer a rewarding experience. The last thing I thought I’d be doing during my lunch breaks was piling into someone’s car to drive around playing Pokémon Go. But it was fun and memorable, and I thank them for that. And honestly, I wouldn’t have even had this internship if it weren’t for the imagination of the recruiter who asked for my resume and took a chance on a nervous little sophomore. (Thank you, Carlos!)

Now, with the world handling the complications of COVID-19, I appreciate Micron’s imagination in creating a virtual internship experience. Though I’ve had my fair share of fights with my laptop and the occasional VPN issues, I am happy that I once again get to work with my team.

So yes, as cheesy as it sounds, it’s the power of imagination and friendship that has helped me pursue a career in STEM, and I wouldn’t have it any other way. 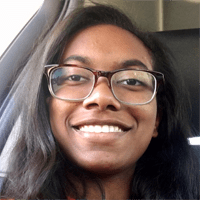 Adia Wood is a fourth-year undergrad at the University of Florida, pursuing a major in electrical engineering and a minor in Japanese. In her free time, Adia enjoys reading and writing, and she hopes to be a published author one day. Her hobbies also include drawing and playing the piano.