Since its inception, the NVM Express (NVMe™) storage interface has grown at an amazing rate. In the middle of this growth, NVMe SSD are still having to compete with legacy interface SSDs like SATA and SAS in everyday enterprise and cloud workloads. These older designs are a holdover from decades ago when spinning storage ruled the enterprise.

Here’s where we’ve been

For quite some time, we’ve lived with limits in our storage choices. We could eat our cake — or we could have it, but we couldn’t do both. Our SSD choices have been limited by several factors:

We’ve needed something different. Something that was performance- and budget-focused; something forward-looking. We needed a complete family of SSDs that combined the benefits of a flash-only interface (NVMe) and its immense bandwidth with an approachable price point and flexible form factors. And we’d also like to have dual-port options (like we did with legacy HDDs).

Are we asking for too much?

Imagine the value a flash-optimized NVMe SSD could unleash if it was priced similarly to legacy interface SSDs, offered immense bandwidth, was thin enough to pack a bunch of them into a single chassis and wasn’t a budget breaker.

It would also make life simpler if we could build an entire platform’s storage from this one family of SSDs.

Again, are we asking for too much? Historically, probably. History has just changed.

This value is realized in the Micron® 7300 series of NVMe SSDs. Available in both M.2 and U.2 (7mm) form factors and designed to enable performance-starved applications and workloads to thrive, the Micron 7300 brings affordable NVMe to mainstream enterprise and cloud deployments.

The 7300 really is a complete family, spanning the interfaces, capacities, features and design to enable a platform to deploy 7300 SSDs for system boot, hot data cache and fast access capacity — in whatever your platform supports. Meet the members of this family: 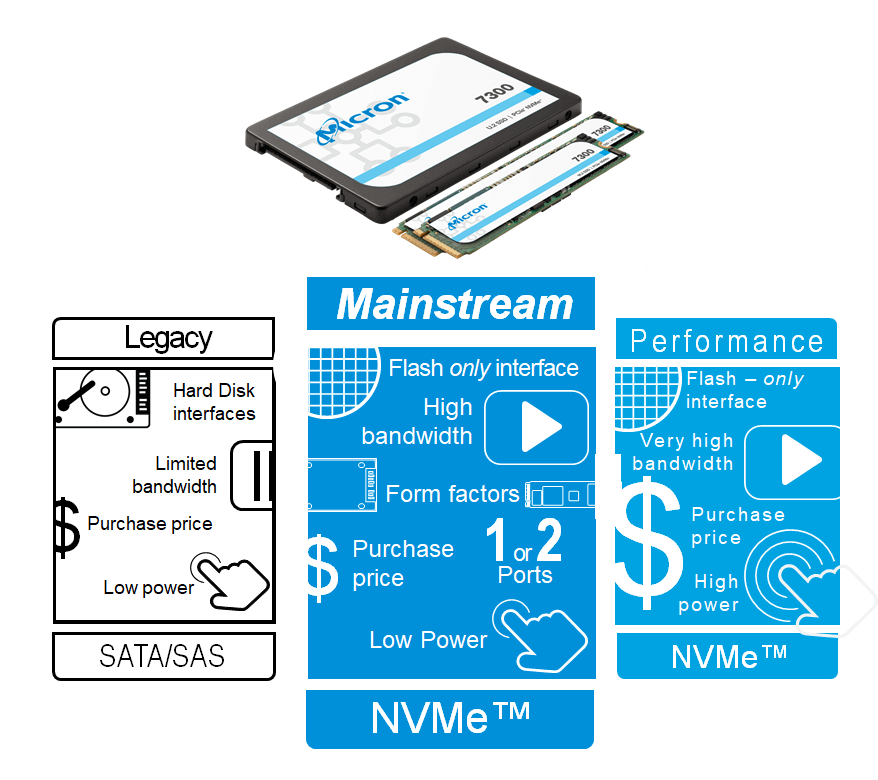 7300 MAX: Mixed-use IO — Some of the most critical data, the data we write and modify most, is the hottest data in a platform. Hot data drives your business, day in and day out. Hot data isn’t stagnant — far from it. Hot data isn’t written (ingested) into the system in neat, orderly and sequential chunks. Hot data can be random or sequential, in small or large blocks, organized or chaotic. Extreme uses demand different storage, something with high endurance (often filling the SSD three times a day while demanding the ability to consistently absorb massive streams of data quickly with low, predictable latency).

7300 PRO: Read-intensive IO — You can quickly leverage vast data stores and their incredible value in the data you already have. Unlock that value by finding it, sorting it and acting on it right away. The 7300 PRO offers a capacity-stretching 7.68TB per 7mm U.2 SSD to build platform and rack density at lightning speed.

Performance-focused NVMe SSDs have been designed for applications and workloads that need the utmost storage performance, the highest IOPS and GB/s with the lowest latencies (fastest response times). These applications depend on high-performance NVMe SSD speed for their success. These workload demands weren’t met with existing SATA or SAS SSDs because satisfying their insatiable storage appetites came at a price. 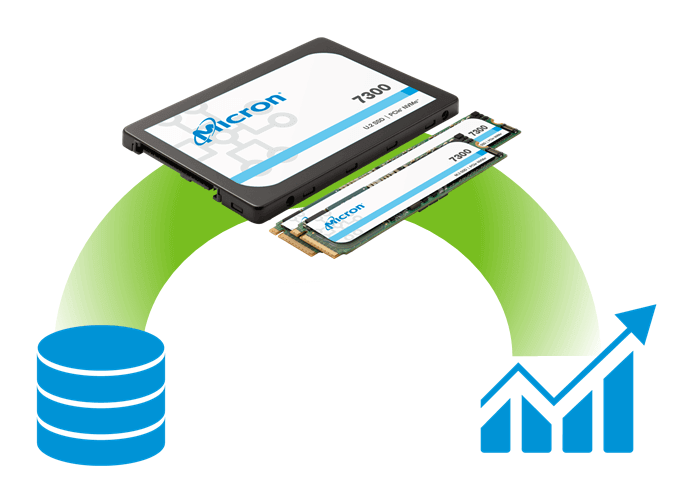 Rapid adoption of both performance NVMe and legacy interface SSDs addressed a broad range of customer needs. They “bookended” SSDs into the highest of the high (performance NVMe) and the daily worker (legacy).

The net effect of this bookending approach is a vast, open and unserved middle ground of everyday applications and workloads. Workloads that were prime for using SSDs abounded. SSD options didn’t.

For some workloads, legacy interface SSDs had to suffice because the additional cost for performance NVMe may have been out of reach. When we needed more, we made a significant jump into performance NVMe — with an expected price premium.

Are we asking for too much when we want to use SSDs without these compromises in our mainstream workloads?

For cloud providers and enterprise IT organizations moving up from legacy SAS/SATA infrastructure who need fast, consistent application storage performance for virtualized, mainstream workloads, the Micron 7300 series NVMe U.2 and M.2 SSDs deliver PCIe performance at SATA power and price levels while improving latency and throughput.

So to answer the question above, no, we are not asking for too much when we want to use SSDs without compromises!

Learn about the 7300 family

Visit www.micron.com/7300 to learn more about the mainstream series of SSDs with NVMe. Contact our samples center to evaluate the 7300 in your environment.