Talk to Me: High-Performance Memory and Storage Accelerate Speech Recognition

When your goal is to make computers intelligent, empathetic, and truly interactive with humans, the current developments in artificial intelligence (AI) and speech recognition take the words from the tip of your fingers to the tip of your tongue.

Automatic Speech Recognition (ASR) got a boost with the increasing sophistication of deep learning algorithms. Now, speaker-independent recognition systems can process speech from almost anyone, in almost any condition. While there is still work to do, people are already simply talking to their smartphones, smart home assistants, vehicles, and computers without having to type anything on a keyboard. Microsoft®, for instance, uses conversational AI with over 650 million users on Xiaoice, its WeChat bot, as discussed by Lili Cheng, corporate vice-president of AI and Research at Microsoft during the Micron Insight event last fall. By integrating grammar and language models with powerful speech recognition algorithms, we’re getting even closer to a world where our computers and devices say, “talk to me.”

Memory for Accuracy and Speed

Speech recognition is a very complex task. Voices vary in pitch, volume, and patterns of stress, based on age, gender, accent, and physiology. Recordings might introduce aliasing, distortions and background noises. Accuracy – measured in word error rate – and speed, which is typically measured by the real-time-factor, or how close the transcription approaches real time, are the main performance evaluations for ASR.

AI tasks, like speech recognition, are memory sensitive workloads; Micron DRAM, flash memory and storage technology are accelerating the hardware for AI, and deep learning. We believe that memory and storage are the heart of AI. Our foundational hardware infrastructure enables the accelerated flow of data to the processors and helps store the complex parameters of deep learning models that power AI decision making. Micron’s NAND and GDDR6 DRAM memory enable GPUs to work faster than the speed of thought. Our NAND based storage devices enable vast quantities of data to be stored and retrieved quickly, and our DRAM products deliver data to all those GPU processing cores at very low latency and at high bandwidth. 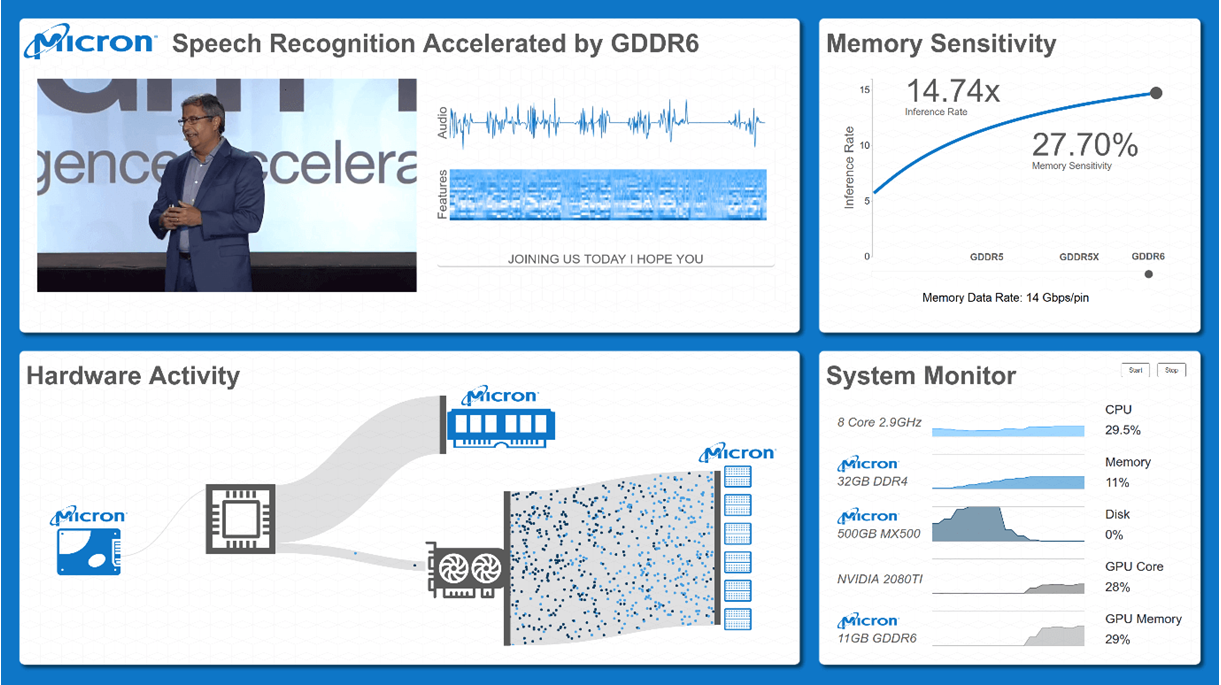 The ASR demo we’ll share at NVIDIA GTC 2019 runs an open source speech recognition program called deepspeech on an NVIDIA® 2080 Ti graphics card containing 11 Micron GDDR6 memory components. At 14Gbps/pin, the GDDR6 memory provides the GPU with a total of 616GB/second of bandwidth. You’ll be able to observe how the inference rate is impacted by the memory bandwidth.  You will see data movement in real time, demonstrating how important the storage and memory subsystems are for AI workloads like speech recognition. The width of the data bus at each interface (bottom left) is represented by the size of the pipes connecting them, and the amount of data transferred across each interface is represented by the number of particles flowing between the pipes.

In the design of AI systems, the performance focus used to be on which processor to use. The new paradigm is that you must also carefully consider the memory and storage systems as well. In this demo, we found the speed of inference for this workload was roughly 30% dependent on the speed of the graphics memory. So, accelerate your infrastructure to accelerate your performance.

The Heart of GeForce RTX™ Platforms

Micron is a key memory supplier for NVIDIA. Delivering high capacity and speed with low power is the goal of next-gen memory and storage. Innovations in DDR5, GDDR6 and HBM2E will be critical to enable the demanding AI workloads of tomorrow in the data center. Micron delivers GDDR6 production performance on the NVIVIDA RTX accelerator as NVIDIA’s launch partner for its GeForce RTX graphics platforms. “It has been a great journey to work with Micron across several generations of graphics solutions," stated Justin Walker, director of GeForce desktop at NVIDIA.

Connect with Micron at NVIDIA GTC 2019

Check out our demo! Micron Technology will host a booth at NVIDIA GTC, March 18-21 in San Jose. Come visit with me, other Micron memory and storage experts, and several of our valued ecosystem partners at GTC Booth #624. Look over our display of NVIDIA products using Micron memory and storage. Plus, don’t miss the sponsored talk on GDDR Memory enabling AI and High Performance Compute by Wolfgang Sprikl, Micron Fellow, Wednesday at 4:30 p.m.

Check out @MicronStorage on Twitter to see videos and updates from NVIDIA GTC. Also, connect with us on LinkedIn.

Eric Booth is a Senior Business Development Manager for Micron’s Compute and Networking Business Unit. Eric leads strategy development in the Datacenter Segment with an emphasis on artificial intelligence applications. In his role, he applies innovative technologies and memory architectures to help customers solve system-level challenges.