Micron Ushers In the Next Generation of Automotive Storage with Universal Flash Storage (UFS) 2.1

The evolution of data storage

63 years ago, IBM introduced the first commercial hard disk drive (HDD), the Model 350. Albeit this HDD wasn’t intended for automotive use, it was state-of-the-art at the time and was developed to replace punch cards and magnetic tape, the mainstay of storage technology in the 1950s. The Model 350 stood 5 feet high and was 6 feet wide. With an associated air compressor required for operation, it weighed one ton and required a forklift for transport. It could store 5 million 6-bit characters for a total storage capacity of 3.75 megabytes (MB). The Model 350 employed 50 24-inch diameter magnetic disks stacked on a spindle that rotated at 1200 RPM, achieving an areal density of 2000 bits/square inch with an average access time that was just under one second. Subsequent generations of the Model 350 were introduced over time – each doubling the capacity over the previous generation.

Below is the now iconic photograph of the Model 350 as it is loaded via a forklift onto the now defunct Pan American World Airways aircraft. This image provides a good perspective of the scale and size of the hard drive, and perhaps provides an appreciation for the scale of performance gains that semiconductors and associated process technologies have delivered over the past 50+ years.

The table below compares several key attributes of the Model 350 and Micron’s recently announced UFS 2.1 automotive storage device. Clearly it’s not a reasonable consideration to employ this HDD in a car; however, this comparison is certainly thought-provoking and is an astounding commentary regarding the prowess of semiconductor technologies. To quote Bob Dylan, “the times, they are a-changin’." 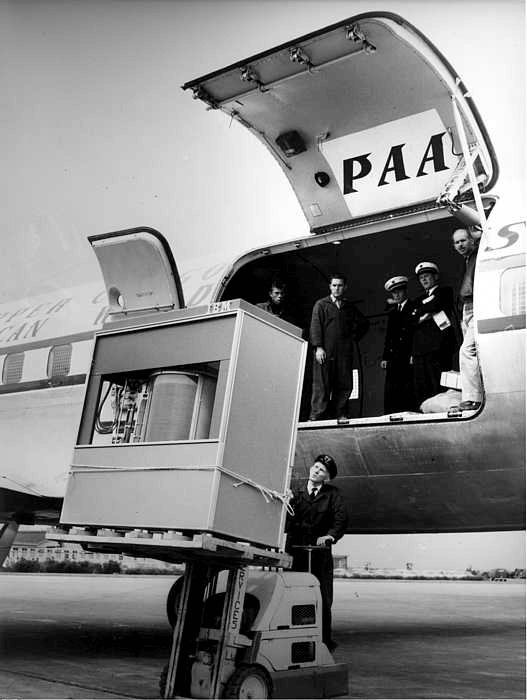 Defined to address the challenges associated with next-generation mobile storage, the UFS specification was optimized to deliver the traditional promise of “bigger, faster, and cheaper” that comes with every generation of storage. The key areas UFS addresses include high performance efficiency and responsiveness as well as instant-on, multitasking, and multiprocessing capabilities. Other areas of focus include lower power, extended battery life, higher capacity, and a smaller physical footprint.

The power consumption of the UFS solution has been reduced significantly due to the low idle power of the NAND and associated controller combined with Mobile Industry Processor Interface (MIPI) connectivity. MIPI is a serial-based connectivity standard that relies upon a very fast, narrow serial connection instead of wider I/O signaling busses, which historically were shown to be the more intuitive means to scale I/O storage performance. Through serial connectivity, the UFS solution can deliver I/O signaling speeds that can reach up to 1.2 Gb/s. By adopting a combination of M-PHY physical and link layers and standard protocols, the UFS storage solution enables consistent and efficient error handling for next-generation mobile and in-vehicle systems.

Beyond the adoption of serial I/O signaling technologies, UFS also improves read/write performance in two ways. Unlike eMMC, there are dedicated channels for reading and writing, allowing for simultaneous read/write data flow. Additionally, UFS supports command queuing, which allows for the regrouping of read or write commands leading to maximal system throughput and performance. In general, a UFS 2.1-based device delivers 4X the peak bandwidth vs. an eMMC 5-based storage device.

Storage performance, power, and data integrity are all key to next-generation automotive systems as storage takes on a greater role in the automobile. And while 1TB of storage in a car may seem like a completely inconceivable idea when compared to the Model 350 HDD, the cockpit of tomorrow’s automobile will easily drive demand for 1TB storage and beyond. Applications including 3D/HD mapping, infotainment/navigation, digital clusters, telematics gateways, AI-based gesture and voice-based commands, CR-V2X communication, HUDs with augmented reality, multiple OS’s and hypervisors will all drive storage to levels previously considered impossible and improbable. In parallel with the increase in storage capacity, there is also an increased reliance on storage integrity and system throughput.

The robust protocol and error handling of the UFS 2.1 solution is well suited to address the traditional challenges of the harsh automotive environment. Micron has been committed to the automotive market for almost 30 years and continues to reinforce our commitment and understanding of critical market and system architecture trends through the introduction of industry leading products such as our announcement of an automotive-grade UFS 2.1 storage product family.

We are very excited to be a key supplier to enable the next generation of automobiles.