About two months ago, we released our first reference architecture (RA) using Micron’s 5100 Series SATA SSDs with Microsoft’s hyper-converged infrastructure (HCI) solution -- Hyper-V with Storage Spaces Direct. In that RA, we illustrated how to take advantage of SSDs to create a high-performance HCI solution using a single-tier distributed file system. This RA generated over 1.5 million 100 percent read 4KiB I/Os per second (IOPS) with an average latency of 0.66 ms. Full data is in the table below.

With the release of the Micron 5200 Series of SATA SSDs, we wanted to revisit this solution. But, we also wanted to evaluate the RA using a completely different server I/O strategy. In the 5100 RA, we used an HBA without a SAS/SATA expander, each drive was directly connected to the HBA. Since several OEMs use SAS/SATA expanders, we thought it would be interesting to see how this RA performed when using a SAS/SATA expander.

From a drive performance perspective, the Micron 5200 SSDs have very similar performance metrics except that the 5200 has much better QoS latency compared to the 5100 equivalent (see table). I am showing both the 1.92TB and the 3.8TB 5100 metrics, because we used the 3.8TB 5100 drives in the original RA and we used 1.92TB 5200 drives in the update. Both models of the 5100 have similar performance specs, so the comparison to our 5200 test configuration should be equivalent to our original 5100 RA except for the use of the SAS/SATA expander and the 5200-based RA would reflect the impact of the introduction of that SAS/SATA expander.

Using this new configuration, the 5200 RA results are still very impressive, but reflect the presence of the expander. While 100% small-block reads are still impressive at over 1.5 million IOPS, the average latency increases by 33% from 0.657ms to 0.840ms for queue depth of four (the queue depth that showed the highest IOPS results). As write percentage increases, the 5200 RA with the expander experiences around an 8-27% drop in IOPS relative to the 5100 RA which did not have the expander. 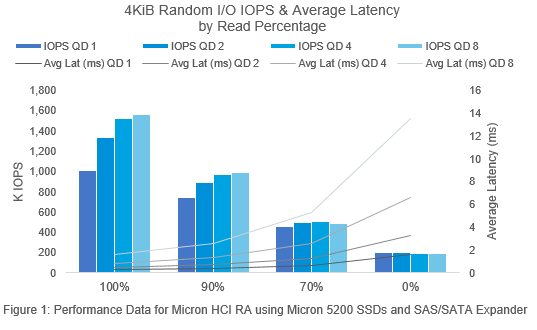 Using SSDs for HCI can result in fast, highly-scalable solutions, but SSDs are only one component of the overall design. Server choice plays a major role in the overall solution design and performance by impacting the options you have for architecting the server’s internal storage. Storage expanders present a decision between maximum performance and maximum capacity for a server. Expanders typically provide more disk channels allowing for more drives to be installed in each server, but they also introduce restrictions for throughput and latency as drives must share a common data path with other drives. Do not reject expanders outright though. The speed of SSDs can minimize the expander’s impact for high I/O small-block solutions relative to legacy HDDs. Also, during our testing, we noted that as block size increases, the performance impact of the expander is reduced. At 128K block size, 100% writes the 5200 RA showed only a 12% impact in throughput relative to the 5100 RA.

If you happen to be attending Microsoft Ignite in Orlando this week, come by the Micron booth (#209) to have a more in-depth discussion with me about how SSDs can be used to make your HCI solution better!