The write workload answer. That’s the tagline for our new Micron® 5200 MAX enterprise SSD It’s specifically designed for mixed-use workloads in the data center. It was always our intent to deliver a mixed-use, next-generation enterprise SATA SSD and it was worth the wait! 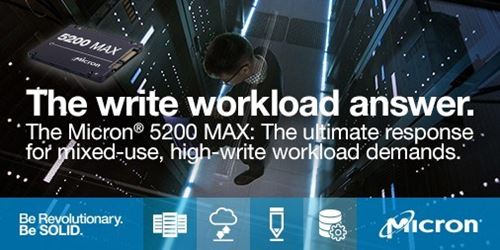 Here’s how you benefit: 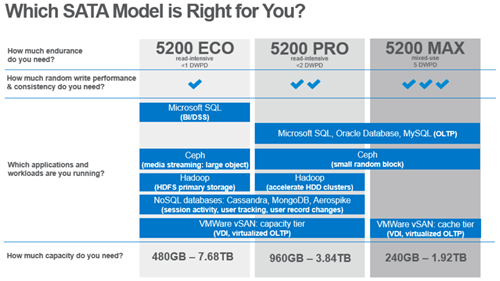 Way back in January, we launched the industry’s first 64-layer 3D NAND enterprise SATA SSD, and we’re excited to now follow-up with the 5200 MAX and 3.84TB 5200 PRO. We believe these are key additions to the Micron 5200 series of SATA SSDs, as about 70% of all enterprise SSDs currently sold are SATA. Maximize your infrastructure and take your business to the next level – because the performance of spinning media doesn’t scale.

*Performance comparison based on public data sheet specifications for GB/s throughput and random write IOPS performance for the best SKU in each competitor’s SATA 2.5-inch mixed-use product family as of the date of this publication. Actual performance may vary.

**Per public data sheet specifications, the Micron 5200 SSD has a mean time to failure (MTTF) of 3 million device hours, compared to the industry standard of 2 million hours for SATA enterprise SSDs. Converting these numbers to annualized failure rates gives the Micron 5200 a 0.29% annualized failure rate versus 0.44% for competing drives. Enhanced reliability is the foundation for consistent, predictable performance.

Micron has taken an active role in shaping the next generation of the leading storage interface for SSDs, which will enable faster and simpler application development.
Read more >
+