If you resolved to update your data center storage by installing some new, fast, SSDs you’ve probably found a lot of choice. It makes a lot of sense to start with the basics: interface choices. Are you leaning towards SATA, SAS or NVMe? Decisions…decisions…

SATA and SAS been around for decades, tracing their roots back through years of spinning storage, back to some very early interfaces.

NVMe is the new kid, having been around for a fraction as long as SATA and SAS. NVMe is a popular kid. It’s a flash-tuned, rising star in the SSD interface world (OK, I made that up…there’s no “SSD interface world” but let’s go with it). 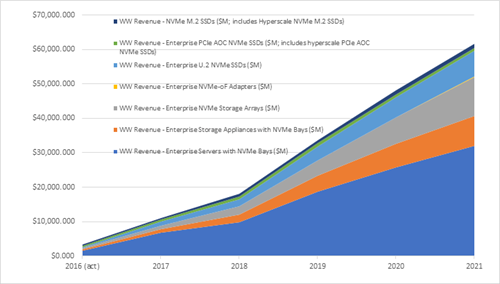 So, is NVMe an SSD panacea? Not quite yet. But NVMe makes high-performance, high-capacity SSDs truly compelling.

Where does NVMe excel? I’m glad you asked! Let’s look at a few…

My colleague Ryan Meredith took RedHat Ceph Storage (beta 3.0 version) for a test drive, fueled by our latest, super-performance NVMe SSDs. A small, NVMe-based cluster with oodles of network bandwidth made the test drive fast. Really, really fast. For all the details, be sure to read Ryan's blog. Here’s the short version:

When you’re done digesting those numbers, maybe take another look at the cluster details in Ryan’s blog – four 1U storage nodes (six NVMe SSDs in each) and three 1U monitor nodes.

Open-source database OLTP workload results look great with NVMe! As I noted in this blog, these systems are broadly deployed and very flexible with extensive community support. NVMe SSDs bring amazing results to MySQL and OLTP.

Sure, we expect MySQL platforms to respond quicker with NVMe. How much quicker was a bit of a surprise. We tested two NVMe configurations and one legacy configuration (just as a level set).

Quick summary: NVMe goes like a rocket! Take a look at the comparisons. Then tell me which one you’d pick (I know which one I’d pick). You can probably guess this but in case not – blue bars are NVMe (grey bar is the legacy)

There’s a ton more detail in this Technical Brief if you’re looking to double-click on the details.

OLTP on Ceph RDB (…with Docker, too!) 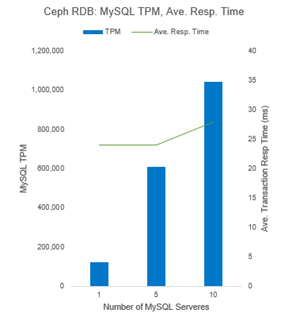 Wait! Docker? Why Docker? Because Docker is cool (well, OK there are lots of techie reasons like containerization, easy deployment and the like, but seriously – Docker is cool).

Nearly linear scaling and more than a million transactions per minute (TPM) with ten servers while maintaining very low latency, even cooler.

Check out another of Ryan’s blogs for the details on this one.

I wrote about how NVMe™ SSDs help with massive scale NoSQL work, too. When our data set is huge – either a local data set or a remote one in the cloud, without performance-focused storage massive-scale data is little more than an archive. It just sits there, enabling little useful value. 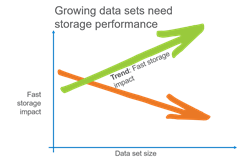 Immense data sets are harder. As our data sets grow, a dwindling percentage of it affordably fits into memory. This can be a troubling trend.

This is where high capacity, high performance NVMe SSDs can help. When you scale your local or cloud based Apache Cassandra deployment, you can get more out of it with NVMe SSDs. I also posted a Technical Brief with the configuration and testing details.

Greg Shulz (founder and Sr. Advisory Analyst of independent IT advisory consultancy firm, Server StorageIO) and I discussed where NVMe SSDs fit (and a host of other NVMe topics) in “Where NVMe Should Be in Your Data Center.” We both agreed that “… NVMe…enables the SSD to better optimize command execution for much higher concurrent IOPS.”

We also believe “…NVMe will co-exist along with SAS, SATA and other server storage I/O technologies for some time to come.”

Where is NVMe driving value for you? Where do you think it will be? I’d like to hear from you. Tweet me @GreyHairStorage or connect with Micron on Twitter @MicronStorage and on LinkedIn.