How we built the new Micron 5200 SATA SSD to deliver more.

Micron recently made available the world’s first enterprise SATA SSD built on 64-layer 3D NAND technology, and I wanted to take you on an inside tour of the product and why the drive’s new NAND is so significant. It’s the defining aspect of the product – and for good reason – since it fuels the 5200 to deliver best-in-class performance, value, and consistency.* It’s also the primary differentiator between our 5100 SSD series.

The Micron 5200 SSD is built on the same proven architecture as the Micron 5100 SSD – just with industry-leading 64-layer 3D NAND.* At a high level, here’s how the two drives compare from a qual perspective. 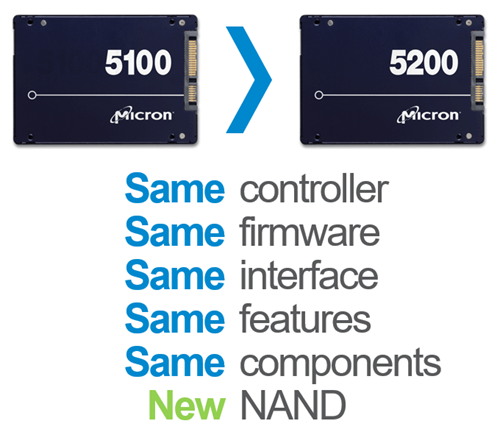 And here’s a deeper dive that shows you line-by-line how the architecture and feature sets of the 5100 and 5200 compare.

By reusing the architecture of the 5100, the 5200 streamlines the qual process. If you’ve already qual’d the 5100, we expect the 5200 to be a quick and easy transition that’ll be worth your investment for two very important reasons.

Here’s what the Micron 5200 SSD gives you compared to other read-intensive enterprise SATA SSDs:

Chris Mellor at The Register noted that “the average SATA SSD has a two million hours MTBF rating, so the 5200 is 50 percent more reliable, at three million hours, with the claimed industry’s lowest annualized failure rate at 0.29 percent versus 0.44 percent for other similar drives. Why the increase in reliability? Customers prefer more reliable drives.”

Not only does the Micron 5200 deliver leading reliability, performance, and capacity, but the new NAND also delivers a better value. This makes it easier than ever before to add more flash into data centers and eliminate storage bottlenecks with fast, consistent performance – and a lower total cost of ownership.

If you’re doing OLTP, BI/DSS, VDI, block/object, media streaming, or virtualized anything, the benefits of using the leading read-intensive enterprise SATA SSD are obvious. Better storage performance means better business performance since the speed of storage is what dictates how fast your website loads, your cloud infrastructure runs, your inventory reports, and your sales roll in. Just one Micron SATA SSD allows you to get 3X the performance of an entire rack of 24 hard drives.*** Imagine the potential impact across your entire data center. That’s the value the Micron 5200 SSD can deliver.

*The Micron 5200 was the first enterprise SATA SSD available to purchase with 64-layer 3D NAND. Capacity and performance comparisons based on public data sheet specifications for GB/s throughput and random write IOPS performance for comparable enterprise SATA 2.5-inch read-intensive product family as of the date of this document’s publication. Actual performance may vary.
**Per public data sheet specifications, the Micron 5200 SSD has a mean time to failure (MTTF) of 3 million device hours, compared to the 2 million hours for SATA enterprise SSDs. Converting these numbers to annualized failure rates gives the Micron 5200 a 0.29% annualized failure rate versus 0.44% for competing drives. Enhanced reliability is the foundation for consistent, predictable performance.
***Based on IOPS performance of 24 hard drives (300GB, 10K RPM, SAS) compared to a single 960GB Micron 5100 PRO SSD in an OLTP workload environment. Results do not reflect differences in capacity and hard drives were not short-stroked. Actual performance may vary. For conceptual purposes only.

Micron is excited about the opportunities that autonomous vehicles bring and the fact that our technology will enable the greatest disruption in transportation since the invention of the combustion engine.
Read more >

For Micron, the ever-growing quantity of data being created nowadays presents a Golden Age for our memory and storage products.
Read more >
+