Last month, in my blog entitled “Micron’s All-Flash SATA Reference Architecture for Microsoft® Hyper-V and Storage Spaces Direct Continues to Illustrate SSD Benefits for HCI,” I announced Micron’s latest, updated reference architecture (RA) for Microsoft Hyper-V with Storage Spaces Direct using Micron’s 5200 SATA TLC SSDs. In this latest update, we showed you how SSDs can provide excellent small-block IO and large-block throughput in a single-tiered solution. In this RA, we illustrated how to build the solution along with a performance analysis of the final solution. I encourage everyone to download the RA and read the results for yourself.

In this blog, I want to discuss VM scaling. While we were building our latest RA, we performed a series of tests using the same hardware configuration as described the RA. To better understand how the cluster performed as we increased the VM load on each node.

To test the behavior as we increased the VM count within the cluster, we ran a series of tests using VMFLEET to launch the target number of VMs, each running one instance of the diskspd load generator. This means that each VM was running a single thread of execution for the test.

We ran both small-block (4 KiB) and large-block (128 KiB) tests identical to those executed in the RA referenced above.

Each VM was configured as described in the RA:

For our analysis, we took the following data into account:

Small-block test results show rapid scaling from one to 30 VMs per node across all read/write ratios. Once all logical CPU cores on the physical processors were allocated to VMs, scalability leveled off at just over 500K IOPS. CPU utilization as measured in the VMs levelled off at around 15% - 16% as we scaled beyond 40 VMs, which coincides with physical CPUs being fully allocated.

The charts below illustrate the IOPS performance, CPU utilization and latency for a typical 70% read IO profile with the number of VMs used along the bottom axis. 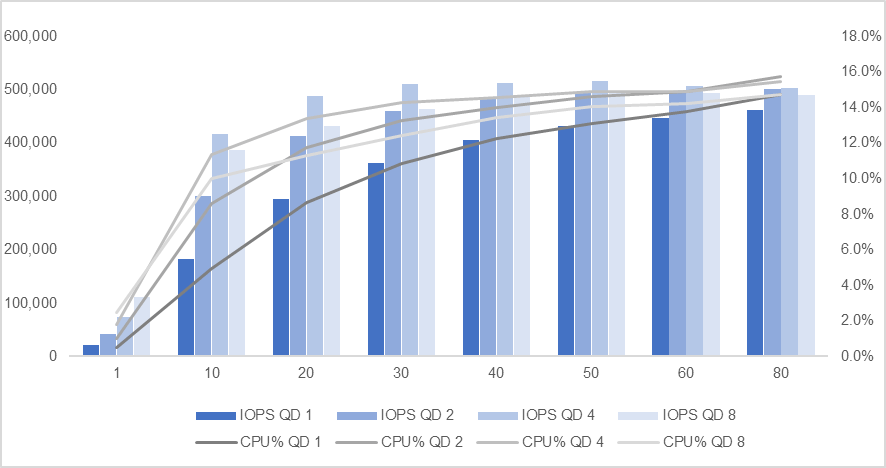 Large-block test results also show consistent scaling from one to 80 VMs per node. In both read and write workloads, performance increases with queue depth across all VM loads while CPU utilization is extremely low at no more than 3%. As discussed in the RA, our large-block workload was executed as random rather than sequential since in a highly varied virtualized environment, even if VMs internally are performing sequential I/O, at the hyper-visor level, all I/O is random as the storage system must manage the I/O of the many disparate VM’s I/O workloads.

The charts below illustrate the Throughput performance (MB/s), CPU utilization and latency (ms) for a 100% read and 100% write profiles with the number of VMs used along the bottom axis. 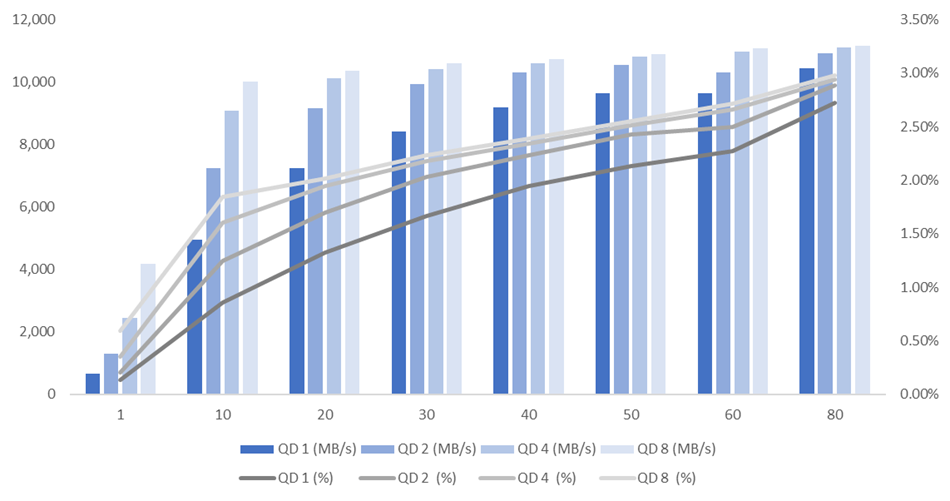 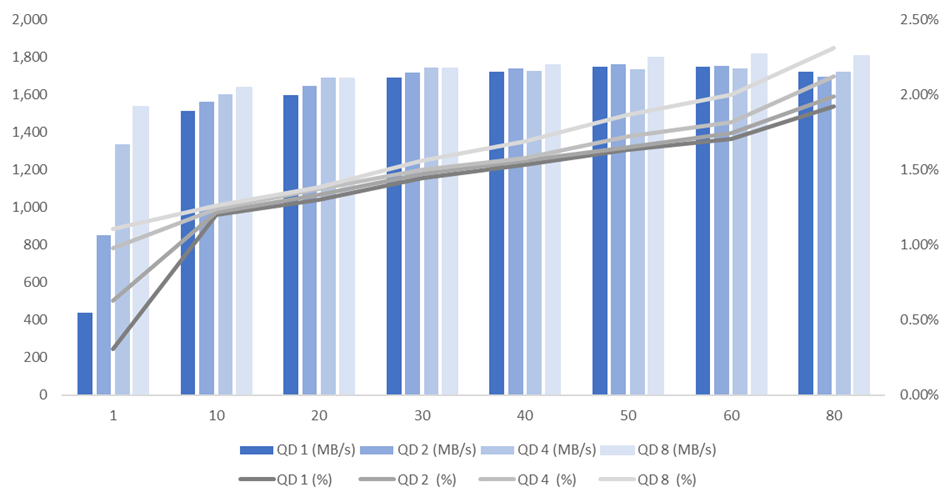 In general, the observations below are solely based on the synthetic I/O workload used for the testing. Each application is going to be unique in how it performs I/O, so your actual results and conclusions will be different from those below. Our goal with these tests and observations is simply to provide a starting point for your own analysis of your VM and application needs.

There are several observations that can be made based on the small-block results:

There are several observations that can be made based on the large-block results:

For the full details, download one of Micron’s RAs to see how we built our solution and learn how you can take advantage of Micron’s high-performance SATA and NVMe SSDs within your Microsoft HCI solutions.

Stay up to date by following @MicronStorage on Twitter!