You need to return a purchased item to the local store. Wrong size, wrong color, it just isn’t right for you.

You’re dreading the return line, but when you get to the store there’s no line. That seems strange. You walk up to the counter, where the clerk scans the item then calls you by your full name, states that you’ve been reimbursed fully, thanks you, and sends you on your way. You are done!

What just happened? What you just experienced is an in-memory database being able to determine what you bought, when you bought it, identifying you and refunding you, all in seconds of compute time.

So, what is persistent memory? It is the fastest DRAM but with a memory that doesn’t go away even if the power does. Micron NVDIMM runs at 2933Mbps performance, but the data is persistent even without power.

There is a convergence in the market between storage and memory. This is due to the demand for faster access to information, or "lower latency" of data access. The drive for lower latency and faster throughput is exacerbated by the artificial intelligence/machine learning/deep learning "wildfire."

Memory databases are the trending upward. Memory is measured in nanoseconds, NVMe drives in 10's of milliseconds, and SSD drives in 100's or microseconds. Getting more data into persistent memory provides 1000x improvement in latency, which is great for analytics. Data turns into intelligent information more quickly. 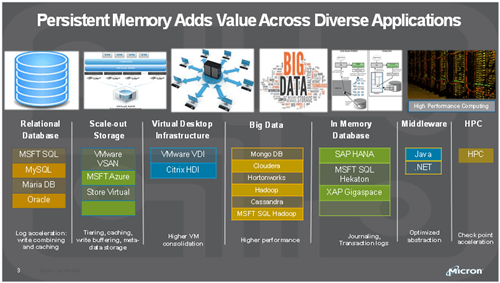 75 percent of servers in the market are now virtualized. Until now none of those virtualized servers could take advantage of NVDIMM persistent memory. Getting lots of data to and from memory required slower SSD transactions with bulk reads/writes – it took longer to find the valuable bits of data.

VMware® now supports NVDIMM for vSphere 6.7®, either in block mode, supporting older applications, or in direct byte mode for newer performance-driven applications. This results in a 1.8x improvement in throughput, meaning you are getting more work done with NVDIMM compared to SSD. This is a 2.3x improvement in latency, so your applications won’t be waiting around for reads/writes to finish. 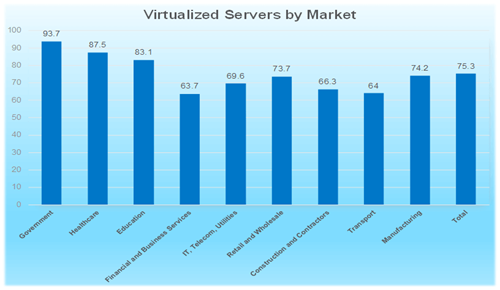 Micron will be discussing this more at VMworld 2018, so keep an eye on @MicronTech and @MicronStorage on Twitter, and micron.com/virtualization for more information!

Prior to Micron, Williams worked at Intel from 1981 to 1989. He earned a BSEE degree from Brigham Young University in 1981.

Watch how Micron DDR5 addresses the memory bandwidth per CPU challenge and transforms the explosion of available data into insight.
Read more >

As the internet of things rolls out, more devices are coming online and creating an evolving threat landscape. Consumer and IoT developers at Micron’s workshop got hands-on training to implement sophisticated yet streamlined data security at the silicon level for embedded devices.
Read more >

Micron at the 2019 Xilinx Developer Forum

Last quarter, Micron’s Embedded Business Unit was a Bronze Sponsor at the 2019 Xilinx Developer Forum (XDF) Europe in Den Haag, The Netherlands, and attended 2019 XDF US in San Jose, California. XDF is one of the key technology events where Xilinx and its ecosystem partners gather to share their latest technology innovations.
Read more >
+