Four Things You Should Know About Quad-Level Cell NAND Technology 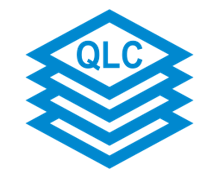 For years, we’ve had to relegate read-focused workloads to legacy storage (HDDs). While many wanted to use SSDs here, their cost made them tough to justify.

That’s changing with QLC and its four bits in each NAND cell (33 percent more than triple-level cell (TLC) NAND). This simple difference narrows the affordability gap between HDDs and solid-state storage, clearing the way to get more value from your data:

QLC is unique, however. Its increased storage capacity makes it better suited to specific applications and workloads.

In this post I’ll show why Micron® QLC technology is a great fit for applications that read more than they write, how it brings data closer to the CPU, and packs more server storage density to reduce the space demands for high-priority, read-intensive data sets.

Find The Applications That Read Far More Than They Write

When applications and workloads are accessing storage, they either read, write or a combination of both. QLC is a great fit for many current and emerging applications.

When selecting which applications and workloads are good QLC candidates, we have to look at how much data they write, because flash wears when written and different flash types have different write endurance. QLC has lower write endurance than other types of flash (I’ve added some background as to why that is towards the end of this post).

Knowing how much our applications write helps us to find those well suited to QLC – an application with mostly read I/O is a good candidate. We can take advantage of QLC by moving these read-focused workloads away from more expensive types of flash or from slower legacy HDDs (and by using other types of flash for mixed-use workloads).

The figure below gives an idea how some applications typically access storage. 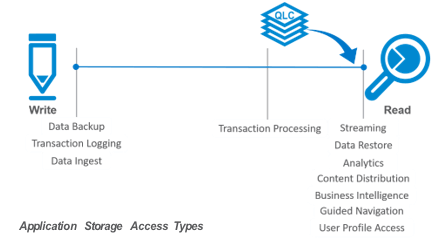 Most of the example applications read far more data than they write, making QLC a good fit.

Here’s another way to look at it. These applications are great QLC candidates and can generate some exceptional benefits from it:

The applications above all share a common thread that makes QLC a viable option: They read far more data than they write and quick, efficient reads are critical to their value.

Moving data closer to the CPU – reducing the time it takes for data to move back and forth to the CPU – enables us to process it, learn from it and derive value from it much faster.

Traditional HDDs are limited by physics – platters spin, physical heads swing back and forth across those platters suing magnets, servos and so on. QLC (and other flash technologies) have no moving parts. Zero. You’ve heard that before, and the picture below shows it.

The latency differences are huge.

Here’s a comparison between a QLC SSD1 and two legacy enterprise HDDs: a 10K RPM (middle) and a 7200 RPM (bottom). The legacy HDDs have much higher latency. 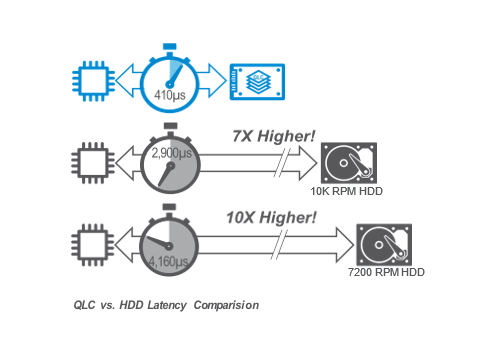 Here’s the kicker: The HDD latencies are so much higher that I have to show them on a broken scale just to get them to fit!

A lot of an HDD’s excessive latency is due to its mechanical nature (for example, random access on an HDD may require its heads to swing across its spinning platters).

The exact latency difference will depend on the HDD design.

Ever-increasing data loads and more applications accessing that data, mean IT departments are pressed to meet increasing storage and service demands. When we are building new HDD-based servers to replace older, end-of-equipment-cycle servers, we have a choice:

We can get good per-unit storage density using newer HDDs and standard 2U servers (they take about twelve 3.5-inch or twenty-four 2.5-inch HDDs, some specialty designs may support more).

That means our raw capacity per server varies as well (depending on how we’re going to use the server):

The advent of 14TB HDDs immensely boosts per server capacity. If we want highest density, we would choose those 14TB 3.5-inch HDDs.

If we want read performance (and as much capacity as we can get), we would choose 10K RPM 2.4TB hybrid 2.5-inch form factor HDDs.

But a 24-slot 2U server with 2.5-inch QLC SSDs offers better capacity than either one! 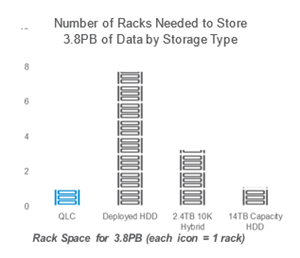 Higher density servers (HDD or QLC) obviously mean higher density racks (and fewer racks to store the same amount of data). Take an example of 3.8PB when using a standard 42U rack (completely populating it the 2U servers noted above.)

QLC’s density advantage is clear when compared to a typical deployed server and an HDD-based performance configuration.

The high-density HDD configuration (twelve 14TB HDDs) does not fit into one rack; it requires a full rack plus about 4U in a second rack.

Micron’s QLC is the next generation of flash storage technology, enabling more applications and more workloads to move to SSDs more easily and more affordably. Micron is the first SSD manufacturer to bring QLC benefits to enterprise-class SSDs.

QLC enables both capacity and speed.

QLC brings the all-flash data center a step closer to broad adoption. While many workloads have already been migrated to flash, the holdouts have been read-focused applications like business intelligence and analytics, NoSQL databases and content delivery, video on demand and streaming, big data and active archives, and data center backup and restore. Micron QLC technology empowers these applications by making solid state storage more approachable for read-focused workloads. Read this QLC Technical Brief for more information.

Learn more about QLC technology and its transformative effect on your business at micron.com/qlc. Stay up to date on what’s trending in storage by reading Micron’s Storage Blog and following us on Twitter @MicronStorage.

The paper discusses several QLC advantages and suggests potential applications and workloads that should work well with QLC. To understand these advantages in a bit more detail, some background on NAND (in general) and QLC (specifically) may help.

NAND storage is different from many other types of storage. When we write data to a NAND cell (also known as programming), we must erase the data before writing new data to that same cell. This process is referred to as a program/erase (P/E) cycle.

NAND is programed and erased by applying a voltage to send electrons through an insulator. The location of those electrons (and their quantity) determine when current will flow between a source and a sink (called a voltage threshold), determining the data stored in that cell (the 1s and 0s).

When writing and erasing NAND, it sends the electrons through the insulator and back, and the insulator starts to wear (the exact number of these cycles in each individual cell varies by NAND design). Eventually, the insulator wears to the point where it may have difficulty keeping the electrons in their correct (programmed) location, which makes it increasingly more difficult to determine if the electrons are where we put them, or if they have migrated on their own.

When we store one bit (SLC), we don’t need to keep close tabs on electron locations, so a few electrons migrating isn’t much of a concern. Because we are only storing a 1 or a 0, we only need to accurately determine if voltage flows or not.

Perhaps misnamed, MLC stores two bits per cell, so we need more precision (determining voltage threshold is more complex). We must distinguish between 00, 01, 10 or 11. Migrating electrons have more of an impact, so we cannot wear the insulator as much as with SLC.

This trend continues with TLC where we store three bits: 001, 010, 100, …110 and 111. Migrating electrons have more effect than in MLC, which further reduces tolerable insulator wear.

Therefore, QLC is a great fit for read-centric workloads because NAND cells are worn negligibly when reading data versus worn more when writing data (programming and erasing). When writing and rewriting a lot of data, the insulator wears more quickly. If a NAND cell can tolerate that wear, it is well suited to read/write mixed accesses. The less wear-tolerable NAND cells are, the better they are suited for read-centric workloads and applications.