Good news! It’s about to get easier to maximize data center efficiency for much better total cost of ownership (TCO). The evolution of solid-state storage technologies has taken a sharp up-turn in enabling capacity, speed and simplicity. Especially for organizations with high-capacity and high-performance data requirements, flash storage innovations like 3D NAND and NVM Express™ point the way to next-generation IT.

My esteemed colleague at Micron, Doug Rollins, has written about this in his technical brief on “High Performance SSD Capacity Is Finally Compelling.” It’s a real eye-opener.

“We are producing 2.5 Exabytes of data every day, an amount equal to 90 years of HD video or a quarter million Libraries of Congress,” says Doug, quoting a Northeastern University blog. Workloads are changing, stimulated by rigorous demands to know more from an ever-escalating data growth. Storage and compute technologies must evolve rapidly to keep up with this reality. But with 3D NAND and NVMe™, that evolution has cranked up a notch. Or two. Or ten. Doug posits that we’re in a Fast Storage Revolution now. 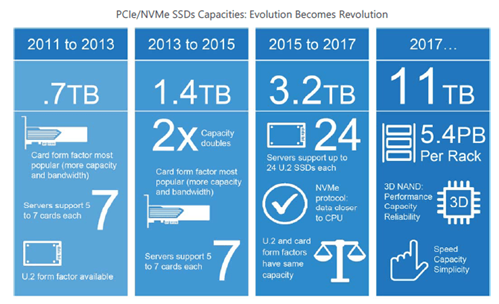 For one, the developments in density per drive, most recently 3D NAND technology, enable an enormous reduction in the number of racks we need to store the same amount of data. At the same time, PCIe® connections on solid-state drives (SSDs) brought high IOPS (I/O per second) and amazing GB/second when compared to legacy storage options. But, says Doug, “These capabilities came at a price: A single PCIe SSD was too small to drive broad adoption. We limited their use, reserving them for small portions of only the most mission-critical workloads, accelerating small slivers of the enterprise.”

Now new high-capacity, high-performance storage innovations such as the NVMe protocol can make business benefits more pervasive across the enterprise. Organizations are expanding the capacity to address more data sets while reducing latency for more responsive applications, increasing IOPS to accelerate transactions, reducing complexity and lowering costs of power and cooling for more workloads. This is how the revolution will escalate, says Doug, and why high-performance capacity is finally compelling.

For Workloads That Must Work Loads

This thinking drove the development of the Micron 9200 SSD, the latest family of NVMe-based SSDs. With its high-density 3D NAND, the Micron 9200 has a smaller footprint than the previous-generation NAND SSD, yet it’s one of the first NVMe SSDs on the market with a capacity exceeding 10TB.

The innovative NVMe-based Micron 9200 SSD delivers fast flash for the enterprise — up to 10X faster than the typical SATA SSDs on the market1. High capacity aligned with high performance enables data centers to store more, do more and know more about their data. To see what others in the industry have to say about the Micron 9200 SSD, read Sweet Christmas: Micron more than triples SSD capacity with 9200 from The Register’s Chris Mellor.

Much More in the Full Technical Brief

As business grows more complicated, requiring faster decision-making and analysis of ever-larger data sets, competitive enterprises are looking to create denser datacenters, ensure reliability and data persistence, and scale storage infrastructure up and out without adding latency. Fast storage has been an evolution and it’s about to accelerate.

Micron delivers the world's most advanced 176-layer NAND in a data center SSD, providing the quality of service (QoS) latency required to enable reliably responsive data center applications. With a broad array of form factors and capacities, the 7450 SSD is designed to address your data center deployment scenarios.
Read more >

Micron takes data security very seriously, and we strive to design with exacting security standards. We welcome research in this field and value collaborations that will improve the security of our products. Any time a potential security concern for one of our products is brought to our attention, Micron conducts a detailed investigation to assess whether our products might be susceptible to such a vulnerability.
Read more >

The Data Center on the Cusp of Change

Driven by a surge of data access and analytic requirements, enterprises are counting on their data center investments to process and store critical information and generate quick and accurate insights. Industry analyst Patrick Moorhead and Micron’s Raj Hazra and Jeremy Werner discuss the evolution of the data center in this fireside chat video.
Read more >
+