The top 3 questions to ask when researching SSD performance numbers. 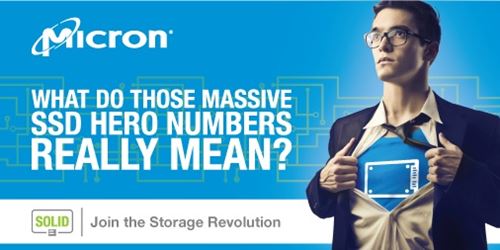 Often when we look at SSD specifications, the first thing that pops out are the ‘hero’ numbers.  These are the numbers that manufacturers and their marketing departments use to promote the superiority of their product. They also typically come with a big, giant asterisk attached to let you know how they got to those numbers.  Every industry has their own hero numbers. For instance, car manufacturers will show you the time it takes their car to get from zero to 60 mph and SSD manufacturers will show you random write performance numbers.

With the release of the 5100 Series SATA SSD, Micron showed the fastest enterprise SATA SSD currently on the market with 74K random write IOPS*.

As a reformed engineer working in marketing, I always check the asterisks on any marketing claims, and you should too.  It helps you understand how those numbers were determined and whether they apply to you.

The simplest way to look at any hero claim is to ask yourself these three questions:

In general, SSDs from major manufacturers have no issues hitting their hero numbers, Micron included.  Unlike a car’s hero numbers (where you might need specific tires, on a specific track, at a specific temperature and humidity while be driven by a professional driver) SSD hero numbers are typically reproducible with numerous free benchmarks (IOMeter, FIO, etc.) on any modern hardware.

The bigger question is whether the hero numbers are applicable to your workload and application.  The answer to that is tricky.  In general, very few customers will ever have a consistent workload that matches the hero numbers.  In the same way that most drivers don’t continuously do 0-60 mph runs, most SSD customers do not expose their SSD to 100% random 4KB writes at queue depth 32 for extended periods of time.

Finally, does random write performance tell the whole story?  Of course it doesn’t.  No single number can ever do that for an SSD or a car for that matter.  But, are there other things that we can look at within that hero number that will give us a more complete picture?  Yes, there are.

For any workload applied to an SSD, you can measure and report a lot of data.  IOPS (input/output operations per second) is a standard metric that the industry uses, but it is only an average and a lot of data can be lost in averages.  You can also measure latency, Quality of Service, consistency and more for a given workload.  This is where Micron has differentiated itself with the 5100 Series. 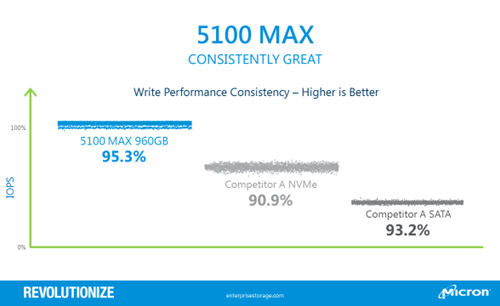 Displayed in the image above, the Micron 5100 MAX delivered more IOPS and higher consistency with that performance. When compared to a competitor’s SATA and NVMe SSDs, the 5100 had higher IOPS (hero number!) and it delivered those IOPS more consistently.

As PC Perspective noted in their review of the 5100, “Performance consistency not only exceeded Micron's specification, it exceeded my own expectations!”  I can’t say I disagree with them.

Whether you launch your car from zero to 60mph in 2.3s, or blast through data at a rate to 74,000 IOPS with your Micron 5100 MAX, keep in mind what those hero numbers mean and enjoy being the fastest (based on whatever information is behind that asterisk).