I recently participated in a webinar on SSDs, HDDs and total cost of ownership.  You can view the recording here if you are interested. There was some good back and forth and great interaction with the audience.

One attendee asked about getting more from their existing database deployment.

The exchange got me noodling a bit.  We’ve shown lots of results with different RDBMS platforms and OLTP – what could our Micron 9200 series of SSDs with NVMe™ do for MySQL and OLTP?

Turns out, quite a bit.

The answer is quite a bit quicker.  We built up three test platforms to compare.  One with a bunch of legacy storage, one with a pair of 9200 SSDs and one with four 9200 SSDs.

New Orders Per Minute (NOPM) – look really, really closely and you can find the legacy configuration’s NOPM (I added an orange highlight in case you have trouble seeing it).

Did you notice how the 2x NVMe shows slightly greater NOPM?  If you need more NOPM and don’t really need the capacity of 4x NVMe SSDs, go with the 2x NVMe configuration.

If it can’t, check out the average latency results.

This graph is sort of the opposite of the NOPM graph.  Here, lower is better.  Way lower is way better.

This one is pretty close. 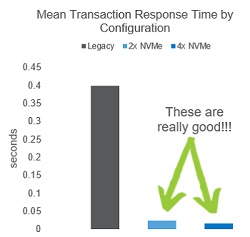 Not hard to see the legacy latency is it?  That GIANT grey bar sort of sticks its head out and says “Look at me!  I take a LONG time to respond!”

It may be kind of hard to tell, but the 4x NVMe shows a slightly lower average latency than the 2x NVMe.  The 4x is bigger and responds a bit faster than the 2x.  Compared to the legacy configuration?  Well……you decide.

Just this: NVMe configuration can be a great fit for MySQL. Need performance and fast response?  A couple of NVMe did the trick in our testing.  Need capacity too?  Double up to four.  What about legacy?  Well…..it’s hard to see the legacy NOPM, but very easy to see legacy latency.

Which would you pick?

Take a look at our complete lineup of SSDs with NVMe (be sure to look at the MAX, PRO and MAX families) and download the 9200 SSD Product Brief.

Already convinced?  Need to convince others?  Download “The Business Case for NVMe SSDs” to help make your case.

If you have questions about the testing we ran, tweet me @GreyHairStorage or connect with Micron on Twitter @MicronStorage and on LinkedIn.