You may recall in my last post I gave an overview of NVMe: What it is, why it should (or will be) in your data center, along with links to companion material. In this post, I want to explore what’s next. 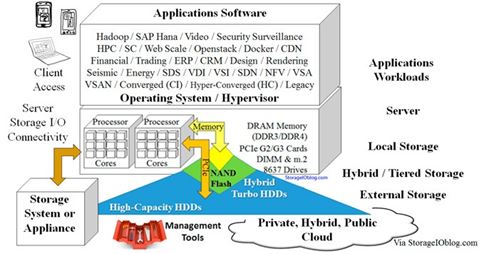 So what’s next for NVMe?

Understand that NVMe means lower response time and increased server storage I/O activity such as IOPs or transactions per second (TPS). It turns out NVMe also helps you to stretch your server’s processor performance further given how it uses less CPU time per I/O operation than traditional protocols and interfaces.

What this means is more server processor CPU time to speed up your applications, enabling more transactions or activity to be done in the same amount of time. This also means less server processor time going to system overhead or waiting on I/Os. The result is being able to get more value out of your existing operating system, database or application software.

In the example given in the chart above, an NVMe PCIe x4 flash SSD drive is compared to a 6Gbps SATA SSD doing 8K Random writes. You can see the IOP activity improvement along with reduced response time. However, note how NVMe used about half as much processor CPU time per IOP while doing more work.

That translates to more work and productivity with the same server. You are ultimately getting increased value not only out of your hardware, but also out of your software licenses. Besides getting more useful work per software license, the other benefit of lower CPU consumption is that resources can be freed up for running additional software or other data service functions without impacting your applications.

By using NVMe enabled devices, you not only improve your financial return on investment, you also drive return on innovation (the other ROI) by using different technology in new ways to help your organization.

Understand the Many Faces and Facets of NVMe

Another consideration is knowing the various form factors of NVMe including PCIe Add-in-Cards (AiC), U.2 (2.5” drive form factor) PCIe x4 based devices using 8639 connectors co-existing with SAS and SATA devices and M.2 mini-cards for inside servers, workstations or other devices. There are many faces and facets of NVMe and different form factor options can be deployed and used in various ways.

For some, this means initial NVMe deployment will be M.2, U.2 or AiC devices installed inside of servers, workstations or appliances. For others, it means those devices being deployed inside software defined storage systems and appliances accessed via traditional SAS, SATA, iSCSI, Fibre Channel, NAS or object interfaces and protocols. Also, watch for additional storage systems and shared NVM, Storage Class Memory (SCM) and SSD based direct attached JBOSS (Just a Bunch of SSD Storage) that also use NVMe as the server to storage interface.

Realize that different environments, applications, workloads and technologies will be on various timelines. For some environments, you may deploy all NVMe using different packaging options in all NVM flash SSD deployments. Meanwhile for others, a hybrid deployment will see a mix of NVMe, SAS and SATA based NVM such as SSD, along with SAS and SATA or Thunderbolt HDDs for tiered storage deployments. Given the flexibility of NVMe and similarities to existing known SAS and SATA tools (leverage your existing experience), you can have co-existence to adopt the right technology to your applications.

Keep in mind, the question of NVMe in your data center is not if, rather, when, where, why, how and with what meaning. Now is the time to start planning for tomorrow today. @StorageIO

Greg Schulz is Founder and Sr. Consulting Analyst of independent IT advisory consultancy firm Server StorageIO and UnlimitedIO LLC (e.g. StorageIO®). He has worked in IT for an electrical utility, financial services, and transportation firms in roles ranging from business applications development to systems management, architecture, strategy and capacity planning. Mr. Schulz is the author of the Intel Recommended Reading List books “Cloud and Virtual Data Storage Networking” and “The Green and Virtual Data Center” via CRC Press and “Resilient Storage Networks” (Elsevier). Greg is a Microsoft MVP and seven-time VMware vExpert. Learn more at www.storageio.com and www.storageioblog.com. Follow on Twitter @StorageIO.