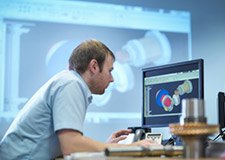 Not that long ago, when I heard the term, supercomputer, I immediately formed a mental image: row after row of rack after rack of massive, hulking, loud machines crunching data that came from sources I dared not think about. “Super” for me was synonymous with “huge” and “unwieldy.” Thoughts of these huge, humming, power-hungry giants would place my brain on pause, at which point I might put in an animated DVD to watch with my kids. Ah…relief.

Little did I know that my mental impression was wrong—or that the movie I was watching had been rendered by a real supercomputer!

I came to know SilverDraft through my job. I got to meet several of the SilverDraft team (Amy Gile, CEO and Founder; Dr. Srinidhi Varadarajan, Systems Architect and Co-Founder; Ted Schilowitz, President), and after just a few conversations with them—my mental image of a supercomputer got adjusted a bit.

A supercomputer can be as large as a semi-truck’s trailer or as small as a dorm room-sized refrigerator. SilverDraft does both. Supercomputers don’t have to be boring, spending every second manipulating ownerless data sets. Instead, they can be harnessed to help the most creative among us be even more so. They can unleash content that was previously inconceivable.

When I got to speak to Dr. Varadarajan directly, he summed up what SilverDraft’s supercomputers needed from storage systems. He said that the level of performance their systems offer is simply not possible without flash and that there’s no way a conventional, hard disk drive can keep up with their system demands.

That was a pretty bold statement! But he went on to clarify, saying that not just any SSD would work.  He noted that they tested several SSDs and found that Micron SSDs were an ideal fit. Again, hearing that from the Co-Founder and Systems Architect was a pretty strong message—that they’d developed a supercomputer that was portable and built on Micron’s SSDs.

That got me wondering (since everything in tech gets better and smaller)—where was SilverDraft headed next? Ted Schilowitz (company president) said that they were going smaller….a lot smaller.  He said that with the industry spreading out, the emergent players are smaller shops (typically 20–50 people) and that their needs have exceeded what they could buy in conventional desktop systems.   SilverDraft stepped up. SilverDraft designed and built the Devil and Demon systems to support their goal to enable these smaller shops (with systems they can afford to own). These platforms aren’t just smaller versions of what SilverDraft has already done—they capitalize on SilverDraft’s expertise to enable wider dissemination of creativity.

More detail is available in the SilverDraft/Micron Case Study