A Little Historical Perspective on Virtualization 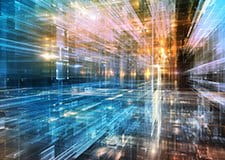 We often hear about old trends making a comeback—like stretch pants from the 80s or your favorite “oldies” tune remixed into a new “pop” song. Sometimes the new version is better—and sometimes, we wish it had never reemerged.

I’ve seen a few welcome comebacks in the technology industry lately—one example being virtualization, which reminds me of my days in the school “computer room,” toiling away on computers with centralized resources. To show you how I’ve seen centralized computing come full circle since then, let me take you on a brief tour of some of my own computing experiences over the years:

With contemporary virtualization solutions, we have the best of both worlds—a way to both easily and practically use all those resources. Our companies had bought them, so it made no sense to let them sit idle just because one application didn’t drive them. Leaving those resources as-is was expensive, inefficient, and wasteful.

Today, we have our choice of not only what workloads to virtualize—but how. Leading software companies, as well as a few startups, offer virtualization layers called hypervisors. Each is different enough to bear consideration, but all are similar in their common goal—letting us to do more with less:

At Micron, we recognize that flash-based storage can have a dramatic impact on virtualization solutions. We spend a lot of time benchmarking our own solid state drives (SSDs) against various virtualization applications, as well as tuning and optimizing them for that given environment. Visit our Virtualized Environments solutions page to learn more.

Let me know if there’s something specific you’re interested in learning about related to Micron’s SSDs and virtualization. You can connect with me on twitter @GreyHairStorage or through our main storage handle @MicronStorage.