On March 4, ECN published an article that I wrote where I address considerations in high-speed bus designs for a healthy “data eye.” Read the full article below:

The interface buses for these low-power memory devices need to operate reliably at data transfer rates approaching 2Gb/s in virtually any environment—regardless of temperature variations and EMI noise interactions. Consequently, the signal integrity of the so-called signal data eye must be as robust as possible. To ensure this, careful attention must be paid to PCB trace layout topology and stacking, as well as decoupling and impedance matching for LPDDR2/LPDDR3 interfaces with system-on-chip (SoC) processors.

Difficulties with interface designs are often magnified due to board size and shape constraints, along with time to market pressures, which can create significant topology validation challenges when implementing LPDDR2/LPDDR3. Extensive validation through simulation using DRAM and SoC supplier IBIS or HSpice models, along with detailed PCB signal trace parasitic model files, is no longer optional. Design simulation using these models must be completed and critically reviewed before PCB generation to avoid problems that could result in missing a product market window.

Designing a high-speed bus for LPDDR2/LPDDR3 encompasses all of the considerations listed below. Fortunately, some of these can be eliminated or simplified for typical embedded high-speed memory subsystems.

Embedded and wireless DRAM designs are often simple point-to-point configurations with one SoC controller interfaced with one DRAM.  This often results in worst-case bus signal trace lengths that are less than5cm.  These relatively short bus trace lengths typically allow termination to be avoided altogether, at least for data transfer rates below~1Gb/s, depending on the actual signal trace topology.  This is governed by the ratio of signal rise time to the transmission line propagation delay time. At higher data transfer rates, transmission line principles need to be applied when designing and performing the recommended signal integrity simulation and analysis on the interface buses.

To some extent, serpentine signal trace patterns can be used to add a small amount of length to shorter traces and improve overall length matching within a signal group. However, as transfer rates approach 2Gb/s, the effects of self-coupling can come into play on the serpentine traces. Therefore, minimum spacing requirements between these features also may apply.

When routing many signals within a small space, some signal path layer changes are unavoidable. Each via used for this purpose adds a delay (as much as 20ps) to signal propagation. Therefore, this delay must be included when assessing the overall skew that the signals will experience relative to one another.

Many signal trace routing complications are reduced in cases where package-on-package (PoP) configurations can be used because DRAM bus trace routing through the PCB to the SoC is eliminated. This is typically a much cleaner environment from a signal integrity standpoint because the signal traces are much shorter and entirely contained within the package substrates of the SoC and DRAM PoP stack.

For higher-density memory solutions, point-to-multipoint bus configurations (one SoC memory controller interfaced to multiple DRAM components)are required. This generally results in longer signal trace lengths and transmission line stubs to the unselected products. For LPDDR3 devices, a new on-die termination (ODT)feature has been added to the DQ receiver design to permit better impedance matching during DRAM WRITE operations on the more complicated, multipoint topologies when operating at higher speeds. ODT can be dynamically engaged by the memory controller to better terminate the selected DRAM component data bus. Many SoC memory controllers also incorporate this in their DQ buffer designs for use during DRAM READ operations.

This option helps meet the ideal scenario of impedance matching:

The LPDDR3 and SoC controller typically offer several values for RON and ODT for ZT to accommodate this. Having the ODT feature available onboard the DRAM and SoC controller eliminates the space required and cost involved with placing discrete termination resistors on the PCB. Of course, any time termination is utilized for signal integrity optimization (provided by either ODT or discrete resistors), additional power consumption will be incurred.

The overall quality (or “health”) of the data eye diagram will depend on how much timing and voltage margin the bus interface signals have with respect to the DRAM and SoC product specifications. Some of these parameters are highlighted in the example signal eye diagram in Figure 1. 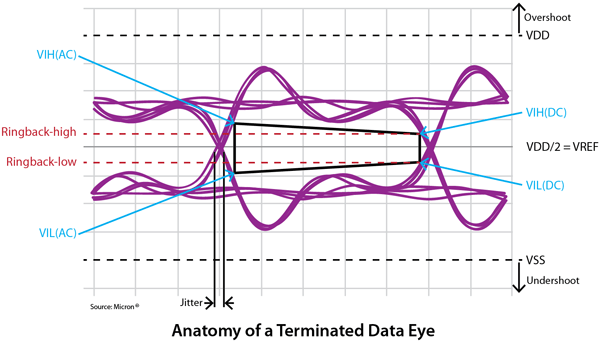 Signal integrity simulation and analysis tools are needed to verify that the data eyes for a proposed design are as robust as possible.

With earlier DDR SDRAM devices, the address and command buses were somewhat less critical than the data bus from a timing and signal integrity perspective. This is because on earlier DRAM products, these buses operated with a single data rate protocol, while the data bus operated at double data rate. To reduce signal count, LPDDR2/LPDDR3 products operate with a combined address and command bus running at double data rate. Therefore, these buses need to be designed more carefully from a signal integrity standpoint.

Taking these primary considerations into account when designing a high-speed memory interface will increase the probability of success with the first PCB revision. For more in-depth coverage of the considerations presented, refer to major memory and SoC supplier web sites for technical notes and data sheets, including the support page on micron.com.

Micron’s innovations in memory and deep learning acceleration are instrumental in making intelligent robots and virtual reality the transformational tools they have become.
Read more >

Memory at the Heart of Today’s Consumer Applications

Business needs new ways of processing, sharing and using data. At CES 2020, Micron focuses on memory for emerging use models such as AI, augmented reality and advanced imaging.
Read more >
+